January 17, 2022 Africa/International Comments Off on Governments, businesses to converge in Abidjan for Intra-African Trade Fair 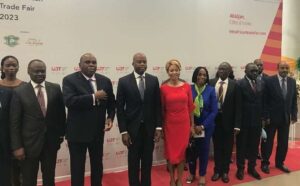 Entrepreneurs, financiers, business leaders, governments and regulators will converge in Abidjan,  Côte d’Ivoire for the Intra-African Trade Fair in 2023 (IATF2023) to deliberate on ways to boost trade and investment on the African continent.

Organised by the African Export-Import Bank (Afreximbank) in collaboration with the African Union (AU) and the African Continental Free Trade Area (AfCFTA) Secretariat, the third edition of the fair is expected to build on the successes of the 2021 fair held in Durban, South Africa.

At a launch in Accra to announce the opening of registrations for the (IATF2023), former president of Nigeria and chair of the IATF Advisory Council, Olusegun Obasanjo, said the IATF2023 would beat the 2021 edition.

He said the favourable outcome of the 2021 IATF was a testament to what the African continent could achieve by working together.

“We are proud to say that the IATF 2021 turned out to be a resoundingly successful week that met and surpassed all our expectations. It epitomized what we can achieve as Africans if we come together,” H.E Chief Olusegun Obasanjo noted.

Looking forward to the next fair, the former Nigeria President stressed that SMEs are encouraged to participate because they are the backbone of the economies in African countries.

On her part, the Managing Director, Intra-African Trade Initiative at the Afreximbank, Mrs Kanayo Awani, said the 2023 fair would provide a valuable platform for businesses to access an integrated African market of more than 1.2 billion people with a combined GDP of over $3 trillion.

In Durban, there was $42.1 billion of trade and investment deals concluded with more than 1,501 exhibitors out of which 1,287 were on site with the others on the IATF virtual platform.

Mrs Awani expressed confidence that the Abidjan event would record higher deals than the previous one.

The IATF2023 is expected to attract more than 10,000 attendees from across Africa, more than 30,000 conference delegates and more than 1,000 thousand exhibitors.

Commenting on the activation of the IATF2023, the Head of Trade Facilitation, Intra-Africa Trade Initiative of the Afreximbank, Dr Gainmore Zanamwe, said Business-to-Business and Business-to-Government exchanges would provide opportunities for further deals, business matchmaking and networking.

The IATF2023 conference will also deal with some thematic areas with additional networking, including the IATF Youth Start-Up programme, which would highlight the support needed for youth-owned startups and small and medium sized businesses to thrive.

The Creative Africa Nexus (CANEX) would provide a platform for Africa’s creative and cultural sectors to connect with policymakers, prominent investors, and thought leaders in the creative sector, Dr Zanamwe added.

The IATF Automotive Show is expected to showcase Africa’s dynamic automotive sector, encouraging the continent’s car and car equipment manufacturers, assemblers, and component suppliers to exhibit their products and find out more about other businesses and market opportunities.

While the dedicated Country Days, he noted would allow participating countries to showcase trade and investment opportunities, as well as any tourism and cultural attraction.

Similarly, day opportunities will be given to the host Cote d’Ivoire and other participating countries in the weeklong event.

The Ambassador of Cote d’Ivoire to Ghana and Togo, Tiemoko Moriko, said the country was committed to hosting a successful IAFT2023 and urged businesses and exhibitors, among others to register for the event.

“I want to assure that the Ivorian state is ready and committed to putting in place everything to prepare for IATF 2023.

“My dear country will take all necessary steps to make the trade fair a success so that the objectives of the IATF will be reached. There will be a well-planned atmosphere for this event. Exhibition points, accommodation, security, everything will be well-coordinated,” he said.

The President and Chairman of the Afreximbank, Professor Benedict Oramah, said some nine African countries did not participate in the IATF 2021 due to COVID-19 restrictions.

Prof Oramah expressed the hope that all the 55 African Union states would participate in the IATF2023.

Secretary-General of the AfCFTA Secretariat, Wamkele Mene, said the IAFT was a key instrument in the promotion of intra-Africa trade, which is critical for job creation for the youth.

He said the Secretariat was working to reduce the barrier to trade and investments by ensuring all 39 countries onboard will follow through with obligations and requirements under the AfCFTA.

AfDB won’t be defined by mischief makers and lies – Adesina

The African Capacity Building Foundation (ACBF), a capacity building agency of the African Union has …