January 7, 2022 Sports Comments Off on GBC warns against piracy of 2021 AFCON content 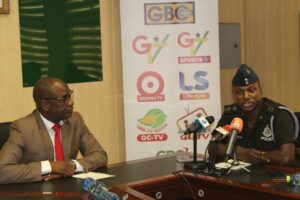 The Ghana Broadcasting Corporation (GBC) says it will take legal actions against any individual or groups, who broadcast the 2021 African Cup of Nations (AFCON) content without legal approval.

Mr. John Kwame Waja, the Director of Legal Services at GBC said “in the event of any television station trying to pirate our content through any medium we would take stringent actions through legal means”.

The Director of Legal was speaking during a joint press conference between the Ghana Police Service and the Corporation, where actions to be taken against perpetrators were streamlined.

According to Mr. Waja, more than €2 million of State funds had gone into the acquisition of rights to broadcast the 2021 AFCON as such GBC had to take stringent measures to protect the investment made by the State.

“A lot of investment would be going into the broadcasting of the 2021 AFCON not only with regards to rights acquired from the Confederation of Africa Football but also the time and money dedicated to the broadcast of the African football fiesta.

“With technical advancement in the digital space, some people would want to take the advantage to pirate or steal content and show it for free,” he said.

Assistant Superintendent of Police (ASP) Victor Dosoo, Deputy Director Public Affairs at the Ghana Police Service, speaking on behalf of Inspector General of Police, Dr. George Akuffo Dampare said that they were delighted to partner with GBC to protect the investment made by the State with regard to the broadcast of the AFCON.

ASP Dosoo indicated that the Police Administration was going to ensure that proper and full-scale criminal investigation was instituted against persons or groups, who decide to pirate content from GBC.

He cautioned any individual, who would decide to pirate the content saying they would face the full rigors of the law if caught and have set down mechanisms to monitor content on the digital space to identify perpetrators in collaboration with GBC,” he added.

Partners who have secured the rights to broadcast the 2021 AFCON in partnership with the GBC include Net2 Television, Angel TV, ETV, Omy TV, MX24, Metro TV, among others.

The 2021 AFCON starts on Sunday, January 9, 2022, with the hosts Cameroon taking Burkina Faso in the opening match of the tournament at Olembé Stadium in Yaoundé.