Surveillance underway to contain the spread of bird flu – MCE

January 6, 2022 General News Comments Off on Surveillance underway to contain the spread of bird flu – MCE 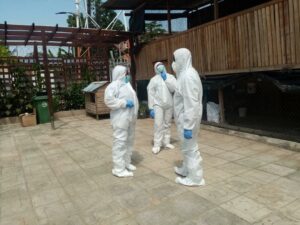 Mr Yohane Amarh Ashitey, the Tema Metropolitan Chief Executive (MCE), has said that surveillance is underway to stop the spread of Avian Influenza (A-H5N1) into the Metropolis.

A team of health and Vet officials from the Assembly had visited the affected farms to ascertain the level of spread of the flu.

Mr Ashitey, who was addressing the media on the measures outlined to control the spread, urged the public to be careful when visiting farms to prevent getting into contact with the virus.

He said affected birds were buried and the farms had also been fumigated to reduce the spread of the virus.

“It’s under control, when we visited the affected farm, we buried the dead birds, their eggs and even their feeds. We should not panic, the Assembly is handling it,” he said.

He said a team was also monitoring other farms to prevent the farmers from sneaking such birds into the market.

He said the Assembly was committed and determined to ensure that the disease was eradicated and urged the public to cook the meat well before consuming it.

Dr Emmanuel Kwao Pecku, the Metropolitan Veterinary Officer for Tema, said the virus affected a farm on January 4 in the Metropolis, adding that 300 birds were affected and 50 died.

He said a laboratory investigation revealed that the birds were infected with Avian Influenza (A-H5N1), adding that the remaining birds would be depopulated and intensive monitoring was ongoing.

Dr Pecku said additional control measures were being undertaken, including the ban on movement in and out of the farm.

He said the Avian Influenza affected birds, including chicken, turkey, guinea fowl, and other avian species, and called on other farmers to get disinfectants at the entrance of their farms to prevent further spread of the virus.

He advised owners of farms to use the services of veterinarians to assist them in destroying and burying birds properly to prevent the spread of the flu.