Police arrests three for unlawful possession of firearm, other implements

January 2, 2022 General News Comments Off on Police arrests three for unlawful possession of firearm, other implements 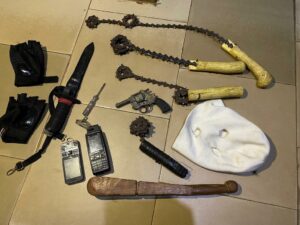 A joint Police-Military Patrol Team tasked to weed out miscreants within the Ho Municipality ahead of the New Year have arrested three persons for possession of firearms and other offensive weapons.

The three were spotted around the Barracks New Town suburb.

Inspector Prince Dogbatse of the Public Relations Department of the Regional Police Command, who briefed the Ghana News Agency, said a search on the suspects revealed a bag containing a foreign pistol (Revolver), club, four whips made of wooden handles and bicycle chain, knife, screw driver and one mask.

The three are currently in police custody assisting in investigations and would be arraigned as soon as practicable, he said.

The Regional Command assured the public of its preparedness to combat crime for the safety of all residents.

It called on them to support the security personnel by providing timely information that could lead to the arrest of criminals to ensure the safety of the communities.