Ghana seeking to formalize the handling of e-waste 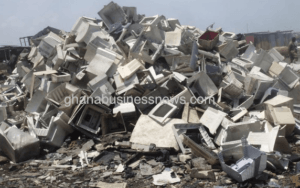 Ghana is seeking to formalise the handling of electrical and electronic equipment waste (e-waste) and ensure that the valuable metals are safely retrieved and recycled.

E-waste could be described as discarded electronic equipment powered by electricity/battery/solar power, which are no longer suitable for use by the owner but has uses.

Currently, 97 per cent of the country’s e-waste is handled by the informal sector while the formal actors in that sector form only three per cent.

The event, which was on the theme, “E-waste and its Impact on the Environment and Livelihoods in Ghana” sought to educate members and the public on dangers associated with e-waste and food safety, its management, and benefit if handled rightly.

He said although the small fraction of e-waste contained hazardous materials and had been identified as the cause of health, agriculture, and environmental challenges it contained valuable resources including gold, silver, platinum, copper, aluminum, nickel, tin, zinc, and iron.

Dr Kyere mentioned that it was important to formalize the collection and dismantling of e-waste in the country because it was the source of livelihood for a section of the public who were in the value chain.

He said effective recycling of the valuable resources from the e-waste could be the avenue and contribute to the emission reduction target as part of the country the Nationally Determined Contributions, under the Paris Agreement,” he said to conserve the acres of vegetation that were removed to mine these minerals.

Mr Felix Mote, Environmental Protection Agency (EPA), said to sanitise the sector the government had developed comprehensive legal instruments, including the programme of action to manage the E-waste menace.

The EPA, he said, had commenced steps to formalize the E-waste business in the country to reduce its effect on the environment.

As part of the steps, he said e-waste collectors would be accredited and individuals who supply the recycling site with unused electronics would be given incentives.

Training would be offered to actors in the sector and encourage people to set up mini recycling sites in their homes that could grow into a bigger business.

Dr Sampson Atiemo, the Executive Chairman of Mountain Research Institute, said everyone had a role to play in the pollution of the environment and its attendant impact on the environment.

Hence, he said it was imperative for all and sundry to serve as watchdogs on each other in order to ensure that the environment was protected and E-waste used properly.

About 80% of eye issues could be resolved – Optometrist