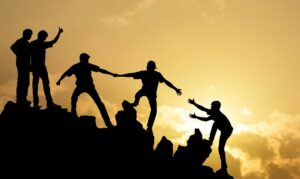 In the office of a friend somewhere in Accra hangs a beautiful piece of photography with two boys at the beach with no shirts on, wearing only faded shorts tied with strings, and torn at the edges, these two boys, about 10 and 11 years old have some of the heart-warming expressions one could ever encounter. With their heads tilted backwards, they were holding a piece of stick together while they were seized in a spasm of hearty laughter as if they have just heard a pleasant news. Without knowing anything about them, one could easily conclude that they are friends. Not even brothers. Because friendships sometimes go deeper than blood relations. On the top side of the photograph is the inscription “Everybody needs somebody”.

We all need somebody in our corner. While friendship is not obligatory, it’s one of the relationships in which two people can share enduring affection, closeness or intimacy and trust. We often feel relaxed and comfortable in the company of friends. We all need that friend we can call at anytime and expect to smile or laugh.

But let me ask a question. What’s the state of your friendships at this moment? As 2021 comes to a close, what has friendship meant to you?

Not everyone has a good story to tell about friends. For some, their predicament in life was caused by friends.

There was a young man who lived a quiet life somewhere in a suburb of Accra, trying to earn a living as a butcher. Everyone who knew him, wouldn’t associate him with any kind of criminal activity. But one early morning, the police went on a raid, looking for suspected criminals. He was found sleeping in a room, among suspects and was arrested with them. He was taken to court, but coming from a poor family that was also uneducated, they couldn’t get him a lawyer. He was provided with a state lawyer who did a poor job of defending him. The young man ended up in jail for more than 10 years. For him, that experience would never possibly make friendship attractive.

There are upsides and downsides to every phenomenon in life, and so it is with friendship. But good friends are a valuable part of everyone’s life, and everyone deserves some good friends. Don’t they?

There was this other young man, who has no education. He moved to Accra from his village to try and find a means to survive. He made friends with some forward-looking young men who introduced him to the business of graphics and print production. In no time, this young man picked up the skills of pitching jobs and winning contracts. It wasn’t long and he established a printing press from which he made tons of money and owned houses and cars. For him, friendships would be desirable for a long time.

There are upsides and downsides to every phenomenon in life, and so it is with friendship. But good friends are a valuable part of everyone’s life, and everyone deserves some good friends. Don’t they?

But what kinds of friends do you have? Are they the kinds who would stand by you in difficult times, or they are the types who are close to you only in jolly times? Do you have the kind of friends who see you as often as they can, or speak to you everyday, but then, one fine morning, you hear from someone else that they are having a ‘house-warming party’ the following weekend? You didn’t even know your friend had bought a piece of land, neither did you know that he was building. Now, what else don’t you know about him?

How about that friend who borrowed from you, knowing your own financial situation, and yet you went out of your way to help in their time of financial crisis, but never made an attempt to pay back, and when you asked for your money, they stopped talking to you? Have they been your friends all this while? Or they were your friends not for your mutual well-being, but just for their selfish interests?

How about that friend who sees you as a temporary connector to a goal? And would vanish into thin air after they have attained that aim?

In these days where there are more mobile phone subscriptions than people, do the people you call friends call you often, to at least check on you? How about the people you call who don’t return your calls, no matter how many times they miss your calls? Well, how about that person who would often cut your calls midway and say they would call back and never do? You are the one who always initiates the calls, but they would stop half-way and say, ‘can I call you back?’ But they never do?

With social media, it has become easier to connect with people and to become ‘friends’. There are stories of people who only met online and have never met in person who have remained loyal to each other. There are people I have met just once in person or never before in person, just social media friends, who have done a lot for me.

You call them friends, but they bad-mouth you? They betray you at the least opportunity in so far as the circumstances of your betrayal give them some edge over you?

Can you lean on your friends in your time of need?

Close your eyes. Count the number of people you call friends that you can be certain to rely on, when the rest of the world turns against you.

Ok. You are willing to go the extra mile for the person or people you call friends, nice. How many inches, are they willing to go for you?

As 2022 begins in the next few hours, you would likely review a greater part of the realities of your life, as you plan to tackle what lies ahead of you. You must review friendship too. Friends can make or break you. Friends can be your source of joy or sorrow. Your success or failure in your next project can depend on friends.

Who are your friends, but more importantly, do the people you consider as friends, see you as a friend?

As we enter this New Year, may we all find that true friendship that elicits that mutual loyalty, affection, trust and dependability.

Email: edogbevi@gmail.com
Copyright ©2021 by NewsBridge Africa
All rights reserved. This article or any portion thereof may not be reproduced or used in any manner whatsoever without the express written permission of the publisher except for the use of brief quotations in reviews.

Editor’s note: The headline for this article has been changed.