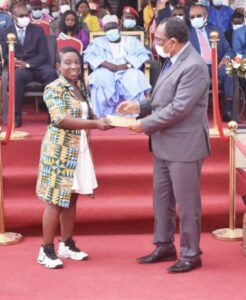 A young up and coming Ghanaian entrepreneur, Ms Benedicta Koranteng has received an award for the outstanding craftwork handicraft in the seventh edition of the International Handicraft Exhibition of Cameroon, known in the French acronym as SIARC.

Ms Benedicta Koranteng, the only Ghanaian who participated in the International Exhibition fair competed with over 500 exhibitors from the other African countries and was among 20 craftsmen who were recognised at the closing ceremony at Yaoundé.

She and the other outstanding craftsmen recognised at the ceremony received a citation, certificate, and cash prizes ranging from FCFA 250,000 to FCFA One-million.

Ms Koranteng based in the Okere District in the Eastern part of Ghana presented hand-woven table mats, umbrellas coasters, bags and baskets, key holders, bracelets, and many others manufactured with local materials at the exhibition and won the hearts of the organizers with such innovative handicrafts.

Earlier in Ghana, Ms Koranteng was adjudged the “Emerging Company of the Year in the Arts and Craft” category Business Excellence awards 2021 organized by ‘CenBa Africa’ and has been selected on the national level to attend several international exhibitions.

Ms Koranteng, a young graduate from the Global Media School, started designing handicrafts such as mugs, souvenirs, scarfs, interior accessories using local fabrics and materials for hotels and other restaurants to fulfill a long-standing passion and talent.

Speaking in an interview with the GNA after the awards at Yaoundé, the elated Ms Koranteng expressed gratitude to the organizers for recognising her efforts at such a huge fair participated by over 500 exhibitors and received patronage from over 3000 people from many parts of the continent.

She said ‘I am so happy for this recognition because I started small and didn’t bring a lot of my crafts, due to delays by the airline, so to receive an award at such a huge platform like the SIARC is a motivation to do more”.

SIARC 2021 week-long fair was held on the theme, “Revitalisation of the Marketing System of Handicraft Products and Conquest of Foreign Markets” attracting over 3000 visitors to the exhibition grounds.

The first edition of SIARC was organized in 2008 by the Ministry of Small and Medium-sized Enterprises, Social Economy, and Handicrafts of Cameroon and exhibitors are already looking forward to the 8th edition for 2022.