Sections of Accra-Kumasi highway to be opened for Christmas

December 21, 2021 General News Comments Off on Sections of Accra-Kumasi highway to be opened for Christmas 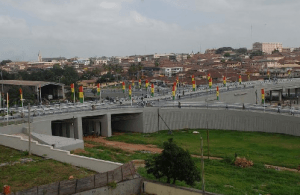 The Kwafokrom–Apedwa section of the Accra-Kumasi Highway, currently being dualised, will be opened to traffic from Thursday, December 23, 2021, contractors working on the project have said.

The 31.7 km road will be opened for two weeks to ease traffic flow on the Highway throughout the festive season.

After two weeks, the road would be closed again for works to be fully completed, the Resident Engineer for the project, Mr Apraku Anane-Appiah, told the Ghana News Agency in an interview.

The opening of the road follows directives from Mr Kwasi Amoako-Attah, the Minister of Roads and Highways when he visited the project site last month.

During the visit, Mr Amoako-Attah charged the contractors to “work day and night” and open the road to traffic before Christmas.

As of Friday, December 17, 2021, the contractors had completed more than 70 per cent of the work, targeting to complete the entire project by March next year, Mr Anane-Appiah said.

He said an inspection team from the Ghana Highway Authority (GHA) inspected the progress of work on Sunday and gave the approval that the road be opened to traffic for two weeks.

“There are three layers of asphalting that we are doing. So far we have completed the first and second layers.

“So we are going to open it (road) to traffic for two weeks and after that we will close it again and complete the remaining works,” he said.

Mr Anane-Appiah said they had earmarked eight separate footbridges at the various towns along the road to guarantee the safety of residents in those areas.

He said the construction of the footbridges were not part of the original project contract so a separate proposal had been sent to the GHA for approval.

“We will be doing some access roads to the towns along the Highway but with the main road, somewhere February-March we should finish,” Mr Anane-Appiah said.

Work on the Kwafokrom–Apedwa project, which commenced in October 2018, was scheduled to be completed in 24 months by the China International Water and Electric Corporation.

The Government has targeted to build 11,000 km of road between now and 2024, out of which 6,000 km are expected to be fully completed by that time.