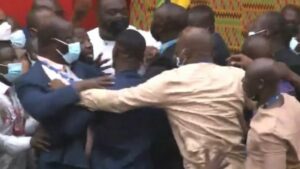 Confusion broke out in Parliament on Monday night when the National Democratic Congress (NDC) Minority prevented the first Deputy Speaker Mr Joseph Osei-Owusu, sitting as Speaker, from casting his vote.

This led to the adjournment of proceedings to 0900 hours on Tuesday, December 21.

The vote was to determine whether or not the House should adopt the Electronic Transfer Levy Bill 2021 (E-Levy) Motion for deliberation.

As the NDC Minority and the New Patriotic Party (NPP) Majority members engaged in the brawl, the First Deputy Speaker left the Chamber.

The Minority Members were of the view that the Standing Orders of the House did not permit a person sitting as a Speaker to vote.

It took appeals from Mr Haruna Iddrisu, the Minority Leader, for the situation to return to normalcy.

The chaos led to a standstill in Parliament for about 45 minutes.