In June 2020 when the Ghana government finally named MTN a significant market power (SMP), the main reason was very simple – MTN had for years controlled about 75 per cent share of the telecoms industry cumulatively – in terms of subscribers, voice and data traffic, SMS, value-added services like mobile money and revenue among others. The main reason subsequent was therefore the need for regulatory interventions to correct the market imbalance.

It was not a secret that MTN was the only profitable operator in Ghana, in the real sense of the word. Indeed, naming MTN SMP was long overdue, as government would note that under the National Telecommunications Policy (NTP), any operator with 40 per cent or more market share in voice, data, SMS and value-added services, is considered an SMP. At the time of naming MTN SMP, it had held way more than 40 per cent market share for over 15 years.

Now MTN has been subjected to a number of regulatory interventions, aimed at correcting the imbalance in the market. This also places MTN in a position to be a Network as a Service (NaaS) to carry the entire ecosystem along the path of growth.

While, the smaller operators are strategizing to take advantage of the regulatory interventions with respect to MTN’s SMP status, they, particularly the much smaller ones, seem to be getting suffocated by their abiding and progressive indebtedness to the de facto SMP in the tower industry, ATC Ghana, which controls an estimated 85 per cent of transmission towers in the country. 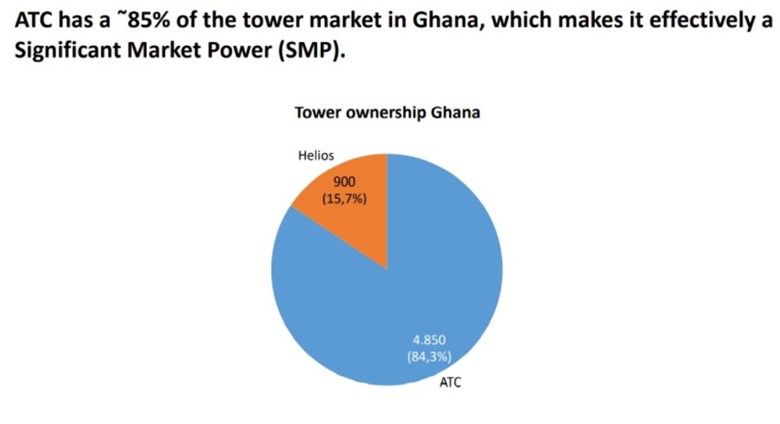 ATC Ghana got to this position by acquiring towers from MTN, Vodafone, Airtel and Eaton Towers. So, currently, their only competitor in Ghana is Helios Towers and a few towers managed by Vodafone itself.

Speaking of high tower costs, under ATC Ghana’s co-location arrangement, some potential investors interested in one of the smaller operators in the country, did their independent due diligence to help them decide whether to go ahead with the deal. They found that tower costs, as in the fees that operators pay to ATC Ghana, constitutes a whopping 70 per cent of their total operational cost (OPEX).

In a position paper they wrote, indicating why they abandoned the deal, that potential investor said they found that ATC Ghana charges about 60 per cent higher than the industry benchmark. The investor therefore walked away from the deal due to the tower cost.

Figure2 below is an extract from their position paper. 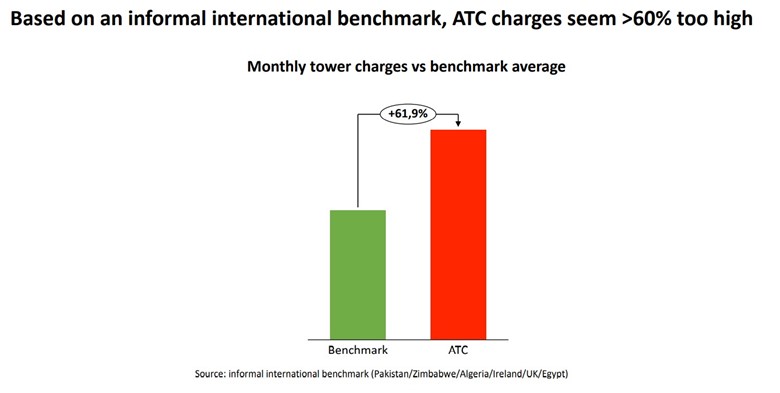 Even if that potential investor’s claims were to be ignored, Techgh24 learnt that just last year, ATC Ghana gave the smaller operators an usual offer of 40 per cent discount on their recurrent tower fees on condition that they paid off their legacy debts. But none of those operators could take advantage of the juicy offer because the legacy debt is just too much for them to pay off.

This should engage the attention of the National Communications Authority (NCA), particularly the newly appointed board, because if ATC Ghana can afford to offer a whopping 40 per cent reduction in recurrent fees, it suggests that they may indeed be charging 60 per cent higher than they should and so there is still a profit margin of about 20 per cent to be earned from the smaller players.

Indeed, per ATC Ghana’s own documents in Figure 3 below, adding more tenants to a tower comes at less cost to ATC. So, the argument is that, it does not make sense for ATC Ghana to keep charging both the big and small operators the same fees, when it is obvious that it does not cost them much to host the smaller players, and those operators are virtually suffocating under their progressive indebtedness to the company. 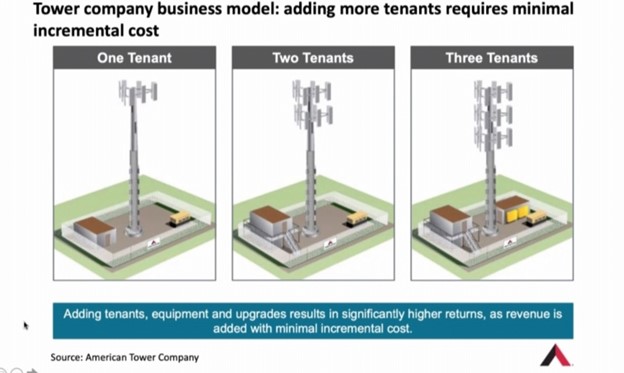 Figure 4 below (from ATC Ghana itself) also reveals that the estimated return on investment (ROI) for ATC Ghana from tower operations in the country is averaging between 13 and 32 per cent (much higher than even profits in real estates). And a greater part of that money is being shipped out of the Ghanaian economy to the United States of America, while ATC Ghana does a few piece meal corporate social investments in Ghana, in the form of ICT centers and support for girls in ICT. 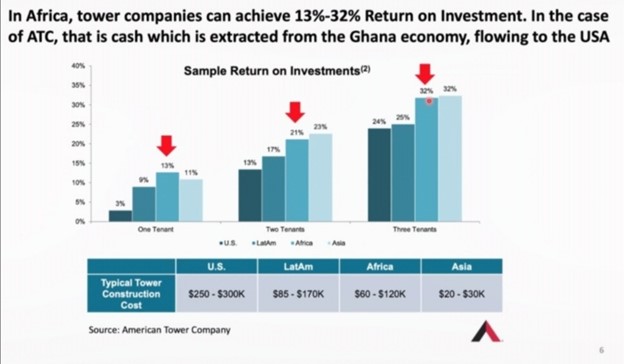 This is not far from International Telecommunications Union (ITU) recommendations on the declaration of SMPs and the subsequent measures that need to be put in place to ensure fair competition, consumer protection and the general creation of an enabling environment for innovation and the expansion of products and services.

So, like MTN, the purpose of naming ATC Ghana SMP would not be to clip its wings, but rather to correct the imbalance in the market and make the provider a vehicle for driving growth rather than suffocating smaller players while only the bigger players thrive.

While the NCA is considering the proposal to regularize the de facto SMP status of ATC Ghana, it is important for them to also look into some very striking allegations in a 2017 report on “Network Tower Sharing and Telecom Infrastructure Diffusion in Ghana” from a study conducted by Alexander Osei-Owusu and Anders Henten. It bothers on how tower co-location is being run in a manner that favors the two leading telcos and shortchanges the smaller operators.

That report made three main allegations based on interviews with former staff of tower companies and telcos.

According to the report, when the telcos sold their towers to ATC and Eaton Towers years back, the telcos staff who were managing the towers at the time, became employees of ATC Ghana and Eaton, and those from MTN and Vodafone in particular, now occupy top management positions at ATC and they allegedly remain loyal to their former paymasters.

The report also alleged that ATC Ghana had a lease-back agreement with the big operators, like MTN for instance, and that meant all the towers it bought from MTN were leased back to MTN, and all kinds of strategies were implemented to ensure that MTN enjoyed some special treatment as far as access to those towers were concerned.

In order for the lease-back arrangement to work, according to the report, ATC Ghana allegedly categorized towers into platinum, gold and silver based on a number of factors, chief among them being location. And telcos were supposed to pay more for platinum towers, which are mainly located in densely populated business centers. So, the smaller telcos who could not afford the high fees are automatically excluded from the platinum towers.

The third allegation in the report was that ATC Ghana implemented a policy which said that the only condition under which an operator would be allowed to participate in the co-location was when the operator agrees to sign onto at least 300 towers, which was difficult for smaller operators, so they were shortchanged, while the big operators continue to have an urge.

When TechGH24 reached out to ATC Ghana, they flatly denied all of the allegations as false and inaccurate, except for the 300 towers minimum requirement, where they subtly admitted that it was a onetime arrangement but not an abiding policy.

They accused the authors of the report of doing a bad job speaking with only former staff of telcos and tower companies without consulting ATC Ghana and NCA before publishing their report.

Find the full response of ATC below as well.

The paper makes certain assertions about ATC Ghana, all of which are false, and contains a number of inaccurate statements about the telecoms industry in Ghana. For example, based on one tower lease agreement supposedly requiring a commitment of 300 co-locations, the authors conclude that the same requirement applies automatically to all operators and therefore, constitutes a barrier to market entry for smaller operators. Not only is this factually incorrect (there is no universal 300 co-locations requirement) but it is also illogical. As wholesale-only providers, towercos have no incentive to discriminate against access seekers; our multi-tenant business model is predicated on providing wholesale access to as many operators as possible. Like any other commercial transaction, tower lease agreements are negotiated bilaterally on a willing buyer-seller basis based on the objectives of each party. It would not make commercial sense for a towerco to propose a high collocation requirement on a smaller operator with less financial means as such agreement would likely fail. By the same token, no operator would agree to a minimum number of collocations if it was not in line with their network rollout plans. The authors similarly conclude – on the basis of one alleged agreement – that a requirement in tower lease agreements for operators to obtain insurance to protect against unforeseen risks constitutes a barrier to entry for smaller operators. Again, their argument lacks substance and their logic is flawed.

What the authors fail to acknowledge is that towercos in fact improve competition between operators and reduce barriers to entry for smaller operators by offering non-discriminatory open access to sites, thereby allowing all operators to deliver networks and services more cost-effectively for the benefit of consumers. Tower sharing reduces the overall investment and operating costs for operators and optimizes their allocation of capital, enabling them to focus on their core business of acquiring and servicing customers, expanding network coverage and providing high quality of service.

It is also noteworthy that the authors have purportedly relied on accounts from current/former employees of local MNOs and towercos without making any attempt to corroborate those accounts with the companies themselves (ATC Ghana was certainly not approached) or indeed the NCA. If this was intended to be an objective piece or research, the authors should have made such enquiries.

ATC Ghana prides itself on being a good corporate citizen. We have earned a reputation in Ghana for adopting the highest business and ethical standards and for our commitment to social responsibility. This year alone, we were inducted to the GITTA Hall of Fame for winning Tower Company of the Year for the eighth time in a row (as TechGh24 reported last week), launched four new Digital Communities to provide free ICT education in the communities we serve, and supported H.E. Minister Owusu-Ekuful’s annual Girls in ICT initiative, which encourages girls and young women to pursue studies and careers in STEM. ATC Ghana is regulated by the NCA. If the NCA had any concerns about our conduct or behaviour, they would have undoubtedly raised them with us.

But in spite of all the explanation, NCA needs to look into those issues thoroughly, and more importantly, into the issue of tower cost, particularly to the smaller operators, with the view to ensuring a holistic, rather than one-sided growth of the industry.