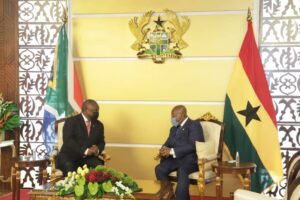 The visit is part of President Ramaphosa’s three-day State visit to Ghana aimed at strengthening the already existing bilateral, political and economic relations between Ghana and South Africa.

After inspecting a guard of honour mounted at the forecourt of the Jubilee House by a detachment of the Ghana Army, the two leaders exchanged pleasantries and reinforced the resolve of both countries to deepen relations.

Mr Ramaphosa and President Akufo-Addo later left for Kumasi in the Ashanti Region to participate in the 50th anniversary celebration of the enstoolment of Nana Otuo Siriboe II, Omanhene of the Juaben Traditional area.

The pair will return to Accra later in the day to hold bilateral talks.

President Ramaphosa came with a strong delegation of government officials and business leaders.