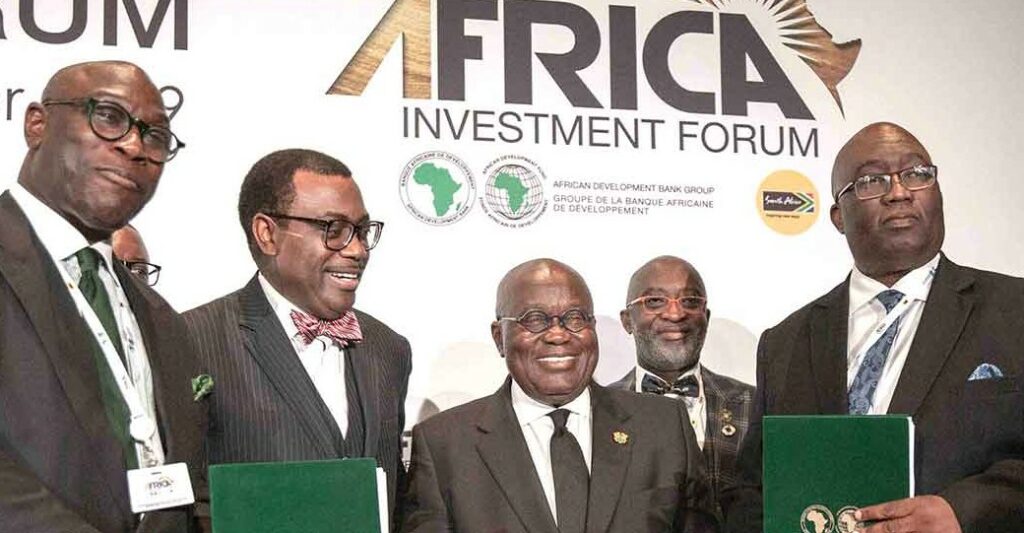 Despite the effects of the COVID-19 pandemic on its economy, Africa stands out with promising prospects. Through economic resilience and reforms in several countries, the continent is now experiencing significant business growth thanks to increased investment. One of the mechanisms put in place by the African Development Bank (AfDB) Group to support and facilitate this great achievement for member-states is the African Investment Forum (AIF), with this year’s theme being: Accelerating transformative investments in Africa.

Africa now offers immense investment opportunities and is gradually becoming a gigantic investment hub on the world stage. According to Dr. Akinwumi A. Adesina, president of the African Development Bank, Africa should be considered today as the global crossroads of investment. Through its leadership and catalytic role, the AfDB works tirelessly on several fronts for the transformation of the African economy. Among the major achievements of the institution in terms of achievements aimed at boosting the African economy, the impact of the outcome of the African Investment Forum remains satisfactory.

In its three years, the Forum has achieved some results. The two editions held in 2018 and 2019 – last year’s was postponed due to COVID-19 – generated more than $78 billion in investments in key sectors of the African economy. At its launch in South Africa in 2018, more than $38 billion in investments was recorded in less than 72 hours and both editions, in 2018 and 2019, underscored the urgency of turning Africa’s challenges into investment opportunities.

A few days before the third edition to be held from December 1 to 3, 2021 in Abidjan, the economic capital of Côte d’Ivoire, although the economic challenges on the continent cannot be underestimated, there is still some optimism.

As Nana Akufo-Addo, president of the Republic of Ghana said in his message to the African Investment Forum 2021, ‘Our biggest challenge is not a scarcity of finance but overcoming a global system that has not allocated sufficient long term resources to support Africa’s economic transformation.’

To accelerate transformative investments, Africa therefore needs infrastructure, initiatives and services, which are all prerequisites for laying the foundation for its development.

To that end, five priority sectors have been identified to benefit from substantial funding in response to the COVID-19 pandemic. These are agriculture and agribusiness, energy and climate change, health, ICT/telecoms, industrialization and trade. During the Forum, increased investment is expected. The 2021 edition will also be devoted to mobilizing the necessary resources to strengthen the fight against the pandemic, as well as climate negotiations recently concluded at COP26 in Glasgow, UK.

The prospects for economic growth in Africa today are among the most promising in the world. Six of the 12 fastest growing countries in the world are in Africa (Ethiopia, Cote d’Ivoire, Mozambique, Tanzania, Democratic Republic of Congo and Rwanda) and Africa’s green economy will be worth $3 trillion.

In addition, the large African reserves of natural as well as human resources give hope for a bright future. As of January 2020, eight AIF deals worth $2.183 billion have fully secured investment. Five of these deals, valued at $1.634 billion have received partial AfDB financing.

During the Forum, Market Days 2021 will feature sessions in which project developers and investors including pension funds, sovereign wealth funds and private equity firms will review projects, in selected strategic sectors.

During the event, plenary sessions will also be organized to discuss how to mobilize institutional funding, including the role of key innovations such as financial technologies, cryptocurrencies, and the place of women as investment champions. The sessions would discuss the possible prospects for world trade over the next five years, the link between peace, security, sustainable economic systems, good governance and inclusive growth, etc.

The AIF 2021 Market Days  will focus on the achievements and highlights of the second edition held in Johannesburg in 2019. At the time, 57 transactions worth approximately $68 billion were reviewed, including one draft, strategic development of liquefied natural gas in Mozambique, which represents the largest foreign direct investment in Africa.

The closing day of the forum will unveil the results of the 2021 Market Days. The AIF transaction monitoring mechanism would monitor progress of commitments made by investors during the forum and determine the way forward to achieve them.