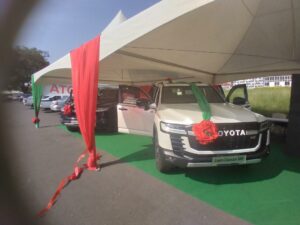 Since its debut in 1951, the Land Cruiser continued to be selected by customers as a safe and secure vehicle symbolising Toyota.

Mr. Andrew Lamptey, the Head of Sales Operations of Toyota Ghana, said a cumulative total of approximately 10.4 million units and more than 300,000 units a year had been sold in 170 countries and regions all over the world.

The redesigned new Land Cruiser is the successor to the 200 Series that debuted in 2007 – a station wagon model.

Mr Lamptey said as the flagship model of the Land Cruiser series, it had in every generation led the way in vehicle evolution while incorporating the latest technologies.

“To continue to live up to its reputation among customers as a vehicle that allows people to go anywhere and everywhere and come back alive and safe, the Land Cruiser’s unrivalled existence has continued to evolve, improving its reliability, durability, and off-road performance based on the actual usage situations of customers all over the world,” he added.

The Head of Sales and Marketing said the development objectives for the new Land Cruiser were to inherit and evolve the Land Cruiser’s essence of “reliability, durability, and off-road performance.”

He said it was also to create a riding experience that enabled the driver to drive with ease on any type of road in the world without tiring easily.

Mr Jerry Mensah, the National Sales and Marketing Manager for Toyota Ghana, said the new Land Cruiser 300 Series was a complete redesign of the outgoing 200 Series, launched 14 years ago.

He said the vehicle’s identity had also been reshaped by merging cutting-edge technologies, some (technologies) accumulated over many years.