Isaac Dogboe in contention for another world title after beating Diaz 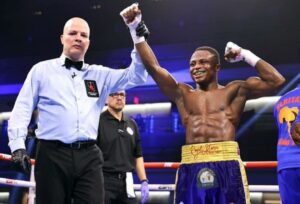 Dogboe who is now 23-2 with 15KO’s is now in contention for a trilogy against Emanuel Navarrete who is the reigning World Boxing Organisation (WBO) featherweight champion.

But the young Ghanaian boxer who has twice been defeated by Navarette would be looking to stage a comeback next year in his quest to reclaim the featherweight title from the Mexican boxer.

Dogboe despite his slow start against Diaz, picked up from the sixth round delivering some powerful punches which earned him the victory.

It was the third successive victory for Dogboe who had previously defeated Adam Lopez and Chris Avalos by a majority decision wins.

Parliamentary Service Board proposes 2% of national revenue to fund Legislature