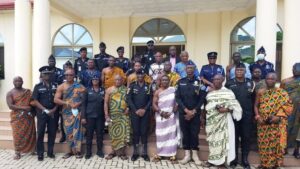 Dr. George Akufo Dampare, Inspector General of Police (IGP), has appealed to the public to reinstate confidence in the Police Service, and revert to collaboration that would help keep society safe.

He said criminal entities continued to take advantage of the weakened police-public relationship to trample on the security infrastructure, which should be addressed.

Dr. Dampare was addressing Chiefs of the Asogli State in Ho when he paid them a courtesy call during a working tour of the Volta Region.

He said his administration was reinvigorating the community-policing concept to help attract the help of local stakeholders in “weeding out bad people”.

The IGP added that the Police Service would reassume its servant orientation, and deliver holistic service to its masters- the people.

“We want to come in the spirit of servantship and not the spirit of lordship, so that we will be able to listen to our masters and find out what challenges have not come to our attention and address them. Then the good old days of respect, trust and confidence that our masters used to have in us as an institution, which has dwindled to a level beyond recognition, would come back.”

“And when it comes back, and the confidence is there, we will work together to make life difficult for the bad ones. Because of our actions and inactions, we have weakened the relationship between good people and the police to the level that the good people in society are not living comfortably,” Dr. Dampare stated.

He added that the relationship between the public and the police had “been broken and worked against all,” and thus working together would “put bad people out of business.”

Detailing a sleepless 24-hour tour of the Region, he said the opportunity was being used to inspect police offices, duty posts, and other installations, and meet with personnel for a close-up examination of the police security apparatus.

The IGP began his tour Thursday, and first called at Aveyime in the North Tongu District, and met with leaders of the traditional areas through which he sojourned.

With him are heads of the various wings of the Service, and the entourage is expected to touch all ends of the Region during the visit.

Togbe Adzie Lakle Howusu XII, Warlord of the Asogli State, extolled the IGP’s exploits, saying, “the success of your work means we can now sleep and open our windows like our forefathers used to do.

“We as citizens, we are prepared to cooperate with you and your men to achieve your vision to give us a safe and happy Ghana. Under your initiative, crime is going down and we are ready to assist you,” he said.

Save the poultry industry – GNECS appeals