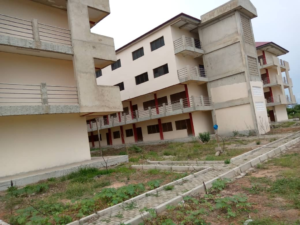 Mr David Agbeli, the contractor for the ongoing Ketu South E-block project at Aflao has said he is ready and willing to come to site and finish off with the remaining work saying, “the project is over 95 per cent complete.”

The GH¢8 million project, a lump sum and a Design-Bid-Build (DBB) contract which was awarded to the contractor by the Mahama administration in 2015 to be executed within 18 months, is yet to be completed some two months to the end of 2021.

A visit by the Ghana News Agency (GNA) to the project site revealed the nicely tiled three-storey four classroom blocks with offices, laboratories and washrooms had some paintings on with electrical wiring and plumbing works done.

The site also looked bushy enough to serve as a breeding place for reptiles but for the intervention of two young men engaged to be providing security to the building who kept burning some items there to ward them off.

Mr Agbeli in an interview with the GNA Friday blamed failure of governments to commit to the contract terms for the delay making the one-and-half year project to travel for about six good years and even that, yet to be completed.

He said while the previous government failed to advance the interest-free mobilisation fee (15 percent of the contract sum) for the start of the project and even any money at all to him before leaving office, the current administration also continued to take two years to make payment after Interim Payment Certificates (IPCs) were raised adding, he left the site about five months ago chasing the consultant, Lamda Consult to raise the IPC for payment to finish the job.

“The treatment the politicians give to us the Ghanaian contractors is bad. This contract was awarded in 2015. Even without mobilisation, I went ahead to start the project. It was about 40 percent complete when they left office, but no money was given to me then. And when the current government took over, an IPC that is raised will take one and half to two years before payment is made.

Currently, I’m even finding it difficult to get the IPC raised. The consultant and the Ministry of Education and the government seem to be disagreeing with the payment based on the work I’ve done because of fluctuations. It’s almost eight months now and the consultant is unable to raise the IPC for me. Meanwhile, we borrow money from banks to commit to these works and the interests that accrue alone cannot be imagined.

The job is almost done, over 95 percent complete. It’s left with plastering of the beams, painting and weeding the place because I was there just last month and saw the overgrown weeds. When I left the site in May this year, the place was clear, no bush.”

Madam Abla Dzifa Gomashie, Member of Parliament for Ketu South called on the government to take the necessary steps to enable the contractor complete the project to provide a conducive environment of study and ease the pressure on the few schools in the Municipality saying, “the schools are choked and their facilities are in dilapidated stages.

Mr Maxwell Koffie Lugudor, Municipal Chief Executive (MCE) for Ketu South said following his confirmation as the new MCE, he visited the site, met with Torgbui Adzonugaga Amenya Fiti V, Paramount Chief of Aflao Traditional Area for discussions regarding the school assuring, he would do everything possible to ensure its completion and operationalisation.

President Nana Addo Dankwa Akufo-Addo has assured that E-Blocks for senior high schools were being completed and delivered.

The President was responding to an ultimatum given the Government by Torgbui Adzonugaga Amenya Fiti, Paramount Chief of Aflao Traditional Area, on the completion of such a facility in the area.

Torgbui Fiti told the Minority members of the Education Committee of Parliament during a recent tour of E-Block projects in the Ketu South constituency, that Government’s efforts towards completing the projects left much to be desired, and demanded that the Aflao facility was completed on time for the next academic year.

Dr Patrick Asuming, an Economist, says, the usage of Ghana card for all financial transactions …