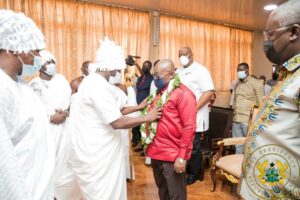 President Nana Addo Dankwa Akufo-Addo, Friday lauded the restoration of peace in the Ga State following the installation of a new Ga Mantse after years of chieftaincy disputes.

“I’m happy today, very happy, for peace to come to the Ga State during my time as President. Everyone should be excited that now we have a Ga Mantse, after the protracted chieftaincy issues since the demise of Nii Amugi.

“I pray to God to give you strength to have a successful reign,” he said when he called on new Ga Mantse, King Tackie Teiko Tsuru II, at his Palace in Accra at the commencement of the second day of his three-day tour of the Greater Accra Region.

The President assured the Chief that he would do all within his power to help the new Ga Mantse unify the Ga State.

He stressed that a united Ga State will help provide a conducive environment for the central government to function, and help improve the living standards of the people, adding that government would work with traditional authorities to transform the country.

President Akufo-Addo in a response to a request by the Ga Traditional Council to rename the Greater Accra Region to Ga-Adangme to unify and reflect the identity of the indigenes, said he would make the necessary consultations on the matter.

He thanked Ga Mantse and the Ga people for their support during the last election, even though the New Patriotic Party, lost seven seats in the Greater Accra Region, and hoped that come 2024, the party would reclaim its seats.

The President assured the Ga Chief that he would address the sanitation issues in Accra before he left office.

He took the opportunity to introduce all the Metropolitan, Municipal and District Chief Executives appointed and approved by their various assemblies to the Traditional Council, and asked that they be given all the support to succeed in their mandates.

The Ga Mantse on his part, commended the President for appointing many Ga indigenes into his Government.

He said he and the Traditional Council stood are ready to help the Government achieve its vision and set goals.

King Tackie Tsuru Teiko assured President Akufo-Addo that the Ga Traditional  Council was committed to solving the many traditional and chieftaincy disputes in the region.

He complained that the teaching of the Ga-Dangbe was dwindling in schools, and appealed to the President to have the Education Ministry post qualified teachers to teach the language in the communities.

The GA Mantse also applauded the Government for the numerous development projects embarked upon in the Greater Accra Region, and the country at large, and asked for more projects.

The President will later launch the “Operation Clean your Frontage,” a programmer under the “Let’s Make Accra Work Agenda” which seeks to ensure cleanliness, and discipline in the region.