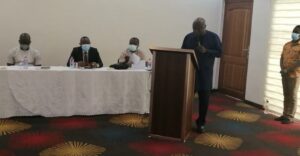 A national Pre-COP 26 meeting opened in Accra on Wednesday as a prelude to Ghana’s participation in the upcoming Climate Change conference, scheduled to be hosted in Glasgow, United Kingdom, from October 31 to November 12.

For the first time in the history of Climate Change conferences, Ghana is said to have acquired a pavilion at the COP in Glasgow, to showcase the country’s climate mitigation and adaptation activities and actions.

The Ministry of Environment, Science, Technology and Innovation, and the Environmental Protection Agency, in partnership with the Ministries of Energy, Transport, Local Government, Decentralisation and Rural Development, as well as the Lands and Natural Resources are hosting the two-day meeting.

The British High Commission and the United Nations Development Programme (UNDP) are the other partners participating in the meeting, which is featuring a high-level session, information sharing panel discussion, and a media engagement on Ghana’s Nationally Determined Contributions (NDCs) and COP 26.

Participants, led by Ghana’s climate negotiators are at the meeting to build consensus; discuss the overview of COP26; Ghana’ Strategic Programme at COP26; Logistics, Dos and Don’ts; Expectations of the Negotiations; Solicitation of inputs into Negotiation Positions as well as COVID-19 Protocols at the COP26.

Dr Kwaku Afriyie, the Minister of Environment, Science, Technology and Innovation, expressed Ghana’s readiness in meaningfully participating in the COP26 and its resolve to galvanise counterpart African countries to “make a lot of noise” at the COP to get the needed attention in its mitigation and adaptation programmes.

He said Africa, indeed, had the moral right to make the most noise because it continued to bear the higher brunt of the impact of climate change even though it contributed the least to global emissions but being asked to make a lot of sacrifices.

The Minister hinted that the implementation of Ghana’s NDCs, which covered seven economic sectors, would soon be adopted by the Government.

He said the NDCs had been updated to be submitted under the Paris Agreement from 2021 to 2030, and that affirmed Ghana’s resolve to address and lessen the potential and hardships that climate change impact may pose to the sustainable development of the country.

The updated NDCs cover 19 policy areas, and translate into 47 mitigation and adaptation programmes of action.

“There are 34 mitigation programmes of actions, which are envisaged to generate absolute greenhouse emissions reduction of some 64 million tons of Co2 from 2021 to 2030,” Dr Afriyie said.

It is expected that implementing the 19 policy actions would help generate absolute greenhouse emission reduction, and reduce the premature deaths of some 2,900 deaths that occur through air pollution.

This would be done through improving the air quality as well as creating over one million decent green jobs for the youth and women in the majority, the Minister stated.

Mr Seth Mahu, the Deputy Director in charge of Renewable Energy, Ministry of Energy, who represented the Sector Minister, said Ghana was making deliberate efforts to focus on renewable energy.

He said it had also resolved to showcase the enormous opportunities in the energy sector at COP26, with special focus on clean cooking sector because “it is one sector that we believe holds the potential to raking in millions, if not billions, of US dollars into our energy economy”.

Ghana’s Ambassador to Italy is dead