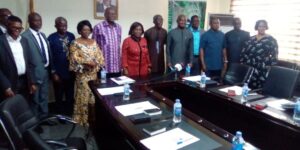 Madam Cecilia Abena Dapaah, the Minister of Sanitation and Water Resources on Tuesday inaugurated a 15-member governing board for the Water Resources Commission (WRC) with Mr Minta Afosa Aboagye as the Chairman.

Madam Dapaah led the members to swear the oath office and the oath of secrecy.

Madam Dapaah in an address said the reconstitution of the Board had come at an opportune time, because issues confronting the water sector had become critical national concerns particularly with regard to the deterioration of the quality of water resources.

“As a result, the Commission’s mandate to regulate and manage the country’s water resources is of paramount importance to the government and that informed their appointment to help run the affairs of the WRC.

“Government is seeking to ensure that all citizens have the water they need to live healthy, productive and happy lives therefore your attention should be to undertake water for all programme through sustainable policies and actions. You should take account of ecological attention to reduce pollution, promote water use efficiency, strengthen decentralised management organisations, improve information and knowledge-based and also intensify education and awareness and monitoring of our water bodies,” she told the members.

The Minister urged the body to be guided by the above approaches towards building consensus through effective participation among all users and managers of water resources.

Madam Dapaah urged the members to enhance their existing good working relationship with all other stakeholders in the water sector, saying; “Your eventual goal at the end of your term of office should be to leave a good legacy, and an organisation that is well positioned”.

Mr Aboagye on behalf of the Governing Board members expressed gratitude to the President and the Minister for their appointment to serve the country.

He said fortunately Ghana was well endowed with water resources, but unfortunately the resources were under siege from inimical activities such as illegal mining (galamey), uncontrol bush burning, intense and unregulated use of chemicals, among others, which had resulted in the siltation of water bodies.

“My colleague commissioners and myself are very much aware of the enormity of the task and pledge to support management in its efforts in finding appropriate solution to remedy the impact,” Mr Aboagye stated.

He called for collaboration among relevant organisations and agencies to solve the increasing waste water generation as a result of industrial activities that would have negative impact on the water bodies.

“Recycling of waste water is another area that we need serious consideration, and if anything at all such concerns should be directed at the industrial concerns so that they can reduce their demand for water,” the chairman said.

“As the Board Chairman, therefore Hon. Minister, I pledge to carry my responsibility with keenness and to the best of my ability to ensure that our vital water resources are effectively conserved and protected,” he stated.