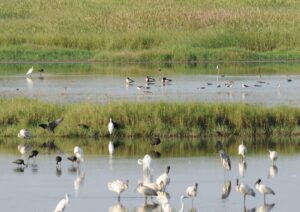 It was a sunny Sunday afternoon in 2009, and as unaccustomed, I took a brisk walk to the Titanic Beach in Sakumono, Tema West, on my return from the hinterland, to watch the playful ocean breeze with its accompanying sweet salty essence and skin-caressing sunlight.

A few meters across the main Tema Beach Road is the Sakumo Ramsar Site, otherwise referred to as the Sakumo Lagoon.

While there, the chirps of birds came in bursts, bringing a small smile to my face. The birds were calling to one another in that beautiful way, with the songs coming from different angles along the site.

I stood still as my eyes followed the birds in flight with an askance look, albeit filled with love and awe. The birds sang right to my soul.

According to Ramsar Sites Information Service (RSIS), an outline outlet, which provides information on wetlands designated as internationally important, the Sakumo Ramsar Site is about 1,365 hectares (ha) out of a total catchment area of 27,634 ha.

It consists of brackish lagoon water with a narrow connection to the sea; the lagoon has a surface area of about 350 ha and a surrounding flood plain of about 700 ha.

The Site boundary is delineated, surveyed, pillared and mapped out as a nature (wetland) conservation area in fulfillment of Ghana’s commitment to the ratification of the Ramsar Convention on Wetlands on February 3, 1971.

The southern boundary follows the shoreline of the sea (Gulf of Guinea) and the rest of the boundary line follows a catchment boundary.

The hitherto well-preserved wetland area designated to be of environmental importance is gradually losing its significance and beauty as it has been left unprotected and depleted in the most bizarre way, destroying the ecosystem, which has been a habitat for migratory birds.

Wetlands in the country are protected under the Wetland Management (Ramsar sites) Regulations, 1999 (L.I. 1659), but the protection and management of Ghana’s wetlands leaves much to be desired as some have given way to encroachment as a result of the urban sprawl, particularly the Sakumo Ramsar Site. About 80 per cent of the area had been encroached on by developers, leaving a fraction of its original size of 280 ha.

Satellite imagery of the Sakumo Ramsar Site shows that the wetland is steadily losing significant areas.

A visit to the site early this month, 12 years on, portrayed a totally different picture  as the world prepares to mark the Migratory Birds Day on October 9, 2021. I observed that the wetland area had deteriorated, with some coconut seedlings planted at some portions to make up for the lost mangrove.

These birds, which bring us so much reprieve and alleviates our anguish, are fast getting extinct and I asked myself if there are any global efforts to salvage the remaining habitat.

There seem to be some hope in sight because the World Migratory Bird Day, an annual global campaign dedicated to raising awareness of migratory birds, continues to galvanize international cooperation to conserve and push for global efforts to protect the birds and the habitats they need to survive.

Suffice it to say that the wetland is very important because it slows down floodwaters by acting as giant shallow pans while plants in these pans hold back the water, preventing flooding in nearby communities and the city in general.

In April, this year, Mr Henry Quartey, the Greater Accra Regional Minister, after a visit to the Site, promised to demolish the structures along the wetland as they pose a threat to the city and its dwellers.

Nii Alabi Gbene II, the Sakumono Divisional Chief, during this year’s commemoration of World Environment Day, on the theme: “Ecosystem Restoration”, expressed disappointment at the current state of the site, which has been worn-out as a result of human activity, and called for its immediate dredging to safeguard it.

He said the major threats to the site are rapid population growth through urbanisation, and the presence of sewage, domestic waste and largely the three-decade sewer challenge in Tema, which result in human excreta moving directly from homes to the site and into the ocean.

The theme for this year’s Migratory Day: “Sing, Fly, Soar – Like a Bird!” is focused on the phenomena of “bird song” and “bird flight” as a way to inspire and connect people of all ages around the world in their shared desire to celebrate migratory birds.

The theme is an invitation to people to reconnect with nature by actively listening to  and watching birds, wherever they are.

Ms Elizabeth Maruma Mrema, the Executive Secretary, Convention on Biological Diversity, in a statement, said: “For many people around the world, watching and listening to birds during the pandemic has been a great source of comfort and happiness, bringing with it a whole new awareness and appreciation of birds.”

“As studies have shown, watching birds and listening to their songs can help reduce anxiety and depression. Quite simply, birds bring joy to people of all ages.”

The Need to preserve the Sakumo Ramsar Site

The Sakumo Ramsar Site has high counts of water birds, which represent more than one per cent of the coastal population of these species.

Wetlands are vital for human survival, being among the world’s most productive environments; cradles of biological diversity that provide the water and productivity upon which countless species of plants and animals depend for survival.

Hundreds of local communities along the Sakumo Lagoon, for instance, continue to rely on the fishes in the Lagoon for their livelihoods.

According to the RSIS, notable bird species, which traverse miles to the Site include waders such as the spotted redshank and common greenshank, sandpipers, curlew, little stint Calidris minuta, the Black-tailed Godwit Limosa limosa and the Black-winged stilt Himantopus himantopus, among others.

Mr Charles Buabin, the Tema Regional Director of the Ghana Tourism Authority, in an interview with the Ghana News Agency on the prospects of the site as a domestic tourism avenue, said the area had come to the attention of the Authority and it had sent a proposal to the Tema West Municipal Assembly to look at ways of leveraging on the resource to make it an attraction.

He said the site could not be promoted when it was not properly developed as a tourist attraction site, and thus proposed the creation of some hiking trails for walks, observation and resting points and visitor centres, among other things, to get the place running.

“The Ramsar Site has over the years experienced a lot of deterioration, but still has a lot of prospects and has to be developed as a tourist site as part of the Beach Front Development Project to boost domestic tourism in Tema because people across the world continue to listen to and watch birds daily,” he said.

To return the Sakumo Ramsar Site to its past glory and “good old days,” stakeholders, including the Forestry Commission and Tema West Municipal Assembly, must, among other steps, enhance awareness creation to educate the public, especially those living around the wetland, on its importance to environment sustainability.

When that is done, the chirping of the birds in the Sakumo Ramsar Site will continue to be music to the ears and soul, creating some awesomeness with their choreographed movement to make the dawn chorus as rich as any symphony.