Some Concerned Members of the Cape Coast Metropolitan Assembly (CCMA), have presented an unspecified amount which was given to them by the Mr. Ernest Arthur, President’s nominee for the Metropolitan Chief Executive (MCE) position.

According to them, they were honourable members with integrity, and as such, they could not be bought or lured with money to vote for someone who they believed was not competent to be the MCE.

Addressing a press conference on Thursday at Cape Coast Metropolitan Assembly Hall, Leader of the group, Mr. Usman Abbam Egyin, Assembly Member for Kakumdu Electoral Area, said the character and behaviour of the President’s nominee towards the people he worked was unacceptable.

“Our image is being tarnished by the general public; everybody is pointing fingers at each assembly member that we have taken money. We are returning the money the President’s nominee gave to us as gift to lure us to vote for him.

“We did not ask for any money neither did we hide under any vacuum to demand any money be given to us,” he stressed”.

He further stated that they would protect their integrity and stand firm because the progress of Cape Coast was at stake and “that is what we are fighting for,” he added and encouraged colleague assembly members to follow suit because it was unethical to accept monies before voting.

They also denied speculations that the Member of Parliament (MP) for Cape Coast South, Mr. Kweku Riketts-Hagan had given them 100 dollars each to influence them to vote against the President’s nominee.

“We voted on our own merit, we voted individually without any pressure, fear or favour,” they stated.

Mr Egyin further explained that their decision to vote against Mr. Arthur’s candidature was due to his bizarre attitude towards the elders and people of Cape Coast as well as the technocrats at the assembly.

He accused him of executing projects without the notice of the assembly, which he described as worrying. 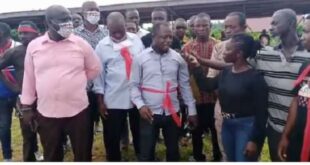