Kologa does not exist in Duta Electoral Area – Assemblyman

October 7, 2021 General News Comments Off on Kologa does not exist in Duta Electoral Area – Assemblyman 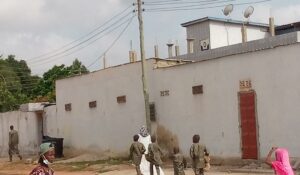 Mr Gabriel Ayitey, Assembly member for Duta Electoral Area in the Ketu South Municipality has asked people to stop referring to a community in his area as “Kologa” but Gakli-Huime.

He said “Kologa” which is an adopted name and literally translates to ‘big vagina’ is a suburb of Gakli (under Duta), a predominant Muslim community in the Municipality.

Mr Ayitey, at a town hall meeting organised in the area clarified that the community, which has become known to many outside the electoral area and the Municipality as Kologa is actually Gakli-Huime.

He narrated how the name had come to stay and urged people to call the community by its actual name hinting that, some residents were going to be tasked to embark on an exercise to rid the community of inscriptions and signposts bearing the adopted name.

“I want to use this opportunity to clarify that Kologa does not exist in Duta Electoral Area. We hear this name every time but the fact is that what people call Kologa is Gakli-Huime. That name was given to the area after a businesswoman, popularly known as Kologa who once lived there and ran her business. As we speak, she is late.

In the coming days, we will go into the community and look out for signposts and inscriptions advertising the community with that name and take them off. It’s time we let everyone know that the community they had always known and referred to as Kologa is actually called Gakli-Huime.”

Mr Elliot Edem Agbenorwu, the outgoing Municipal Chief Executive for Ketu South, said he understood that the place might have derived the name from two other versions of the story; one which he said had no relation with the meaning and the other, everything to do with its meaning.

He added his voice to that of the Assembly member for the area and urged Ketu South citizens and the general public to henceforth, refer to the community by its correct name, Gakli-Huime.