She said telecommunication giant, MTN, registered almost 200 people on the first day and described it as a modest success.

The Minister said the Ministry was monitoring a few reported glitches and would be addressing them soon for a smooth exercise.

Mrs Ekuful was speaking to the media in Accra on the sidelines of a signing of a Memorandum of Understanding on digitisation support programme.

She said at the end of the first week of the registration exercise, an initial review meeting would be held on Friday to discuss the issues identified for quick redress.

“But so far, the many people who have attempted, just a few challenges have been identified with  either their ID cards with some who do not have at all while some have noticed that other people’s names were linked with their ID cards and so they have been asked to rectify the issue with their agents,” the Minister stated.

She said the process was only five minutes and encouraged people to visit the registration centres in person to have their cards re-registered smoothly.

“There is a purpose for what we are doing and there is an end in sight and ultimately, we want to build a credible national data base with information about the actual persons we have…,”Mrs Ekuful said.

Court of Appeal: NCA has mandate to reclassify radius within which FM stations should operate 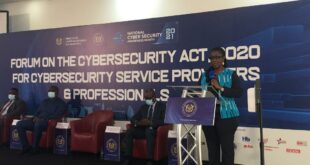