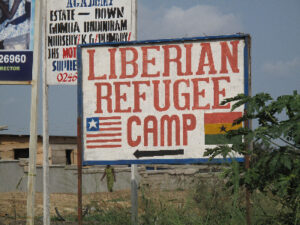 Ghanaian residents of the Budumburam Camp in the Central Region have appealed to government to protect their legally acquired lands in the area ahead of the demolition of the Camp.

They claimed that portions of the area earmarked for demolition by the Local Assembly belonged to them and must not be destroyed.

Reverend Joachim Yeboah, a resident at the Camp, told the Ghana News Agency (GNA) that there were 12 zones in the Camp with seven occupied by Liberians.

“Budumburam is a community on its own, but the Camp is where the Librarians live. We all agree that legally the place occupied by the Liberians was released to government years ago by the chief of the area and we were asked to leave that place for them,” he said.

“The time the land was allocated to them has expired and they are supposed to vacate the place. The Government, working with other stakeholders, made an offer to the Liberians when their tenure expired in 2010.”

Rev. Yeboah alleged that Mr Solomon Darko-Quarm, the District Chief Executive of Gomoa East, was conniving with other actors to forcefully take their legally acquired land at zones eight, nine, and 10 as part of the demolition exercise.

“The Librarians were served notice to exit the Camp by September 30 and they are aware that the place will be demolished. Our area is not part of the demolition and we do not know why the DCE has included our area,” he said.

“This is a thriving cosmopolitan community with levels of educational establishments. As we speak the senior high students are writing the WASSCE. So what will be their fate if the place is demolished now?”

At the time of visit, the GNA met the Ghanaian residents mounting a pole with a red band to demarcate the area they claimed belong to them.

Mr Darko-Quarm, the DCE, said the eviction was a presidential decision intended to pave the way for the demolition of the Camp and the redevelopment of the area.

He described as untrue allegations that he was working with others to claim portions of the land belonging to Ghanaian residents.

He said the directive came after the chiefs and people of Gomoa Fetteh, led by the Chief of the town, Nana Abor Attah, appealed to the Government to demolish the enclave to rid the place of suspected criminals.

At a meeting at Gomoa Potsin in the Central Region on August 3, 2021, the Gomoa East District Security Council directed that residents of the Buduburam Camp should vacate the area, latest Thursday, September 30, to pave the way for the demolition exercise.

An eviction notice, dated August 3, 2021 was issued by the Assembly to that effect.

The notice, signed by the DCE, said the demolition was in furtherance of government’s approval of a request by the chiefs, opinion leaders and the public to resolve the “rising security challenges emanating from the area.”

It said the Assembly and security persons would be deployed to clearly mark the boundaries of the 141-acre land, including Zone 12.

The Camp was decommissioned as a refugee base by the United Nations High Commissioner for Refugees in June 2010, and had since become a settlement, now being described as a hideout for social deviants, including alleged robbery gangs.