TDC has capacity to improve the economy – Minister

October 1, 2021 General News Comments Off on TDC has capacity to improve the economy – Minister 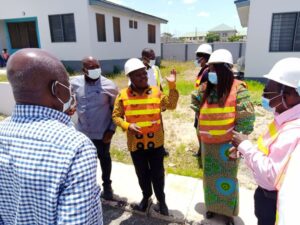 Mr. Cudjoe said TDC would not only be able to increase the housing stock and bring in needed revenue to the country, but would also help solve the unemployment situation in Ghana, by creating many jobs with the development of their numerous housing projects.

The Minister made the observation during a working visit to TDC and inspected some major housing projects it is undertaking in some communities within the Tema enclave.

Mr. Cudjoe said, “What we see is an opportunity to grow TDC to generate jobs, we talk about unemployment but here we have a state-owned enterprise with capacity to expand, capacity to do more if the financial and technical constrains are solved”.

He said “if the crucial issues of encroachment were solved, Ghanaians would see the huge opportunity TDC would offer and the huge financial resources it would inject into the public purse, and help solve the housing deficit in Ghana”.

Mr. Cudjoe said the Public Enterprises Ministry was established to deal with matters of performance of enterprises and therefore he was going to assist TDC by “liaising with other state own enterprises with the same portfolio to support it expand their work.

The Minister indicated that such assistance would not be free but they were looking forward to a reasonable service provision by other state enterprises to TDC so that it would be able to price their housing units fairly.

In that regard, Mr, Cudjoe said he was going to engage the Ghana Water Company (GWC), the Electricity Company of Ghana (ECG), among others, to see how they could be brought in as partners to TDC, which would help reduce cost for construction housing units.

The Minister indicated that market for affordable housing units existed in Ghana, but the challenge was how to get the needed funding in such a way that TDC could produce the houses at affordable prices for buyers.

Mr. Samuel Asante, TDC General Manger, Operations, said TDC was working towards the completion of abandoned projects and develop some identified empty spaces into modern communities with accompanying facilities such as clinics, shopping facilities, etc., to increase the housing stock.

As part of the visit, the minister and his entourage visited the Kpone Affordable Housing site, the NHMF Estates at Community 22, the Kaizer Flats, Community Four, the TDC flats at Community Three, and the Ocean Park.