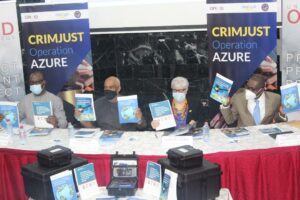 The United Nations Office on Drugs and Crimes (UNODC), under the CRIMJUST Global Programme, has launched the “Operation Azure” to prevent and respond to synthetic opioid trafficking in Latin America, the Caribbean and Africa.

The programme is being organised as part of the UNODC Opioid Strategy, funded by the US Bureau of International Narcotics and Law Enforcement Affairs.

Ms Stephanie S. Sullivan, the US Ambassador to Ghana, at the launch, said the use and abuse of opioids was a global epidemic, which required global solutions.

She said the US was aware of the devastating effects of fentanyl and heroin from overseas, adding that approximately 93,000 Americans lost their lives from drug overdoses in 2020.

According to the World Health Organisation, in 2019 recorded 350,000 deaths attributed to opioids, worldwide.

In Ghana, and throughout the region, the abuse of tramadol and other pharmaceuticals was a growing problem, she said.

“The Commission has strengthened its drug sensitisation programme across the country and deployed officers to the major courier service companies’ sorting centres and some regional post offices for the examination of courier parcels,” he said.

He said the Commission would work in the spirit of collaboration to disrupt the activities of drug trafficking organisations by intercepting drugs and arresting and prosecuting the criminals.

He called for the use of technology to increase the effectiveness in the fight against drug trafficking for success of the Operation.

Food shortage is far from us – MoFA