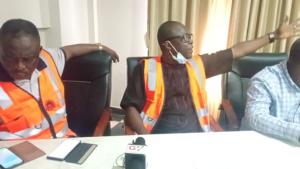 The Ghana National Association of Small-Scale Miners (GNASSM) is calling for the immediate release of members of its taskforce who were recently arrested by a group of military men.

The taskforce members together with other members of the association were arrested at a mining site at Watereso in the Amansie West District, on the instructions of the Ashanti Regional Security Coordinator on September 08 this year, and are still in military custody.

Mr. Abdul Razak Alhassan Spokesperson of the Association told journalists in Kumasi that, the arrest of the taskforce members was an attempt by some individuals within the security services and political actors, who were playing various roles in the illegal mining fight, to tarnish the reputation and the image of the association in the eyes of the government.

He described the allegations of extortion, harassment and posing as military officers, levelled against the members arrested as unfounded.

Mr. Alhassan said the leadership of the Association rejected the extortion and harassment charges as well as the charge of the taskforce members posing as military officers, which were put on the public domain by the Ashanti Regional Security outfit after the arrest.

He pointed out that the facts put out after the arrest were twisted to taint the image of the taskforce and said those arrested were working under the instructions of the Association and had committed no offence.

He wondered why only three out of the five members arrested at the mining site were paraded in public and said those arrested and paraded were genuine members of the taskforce.

According to Mr. Alhassan, the leadership of the Association did not understand why suspects were being kept in military custody instead of handing them over to the police to investigate the matter.

Mr. Kwabena Tawiah, a foreman of the Kusbee Mining Company Limited, where the incident occurred, told newsmen during a visit to the site that the taskforce members never came to the site to extort money.

They were there to support the company to ward-off attempts by some illegal miners to invade the company’s concession.