Chiefs must support government in power to succeed – Tepre Hodo

September 11, 2021 General News Comments Off on Chiefs must support government in power to succeed – Tepre Hodo 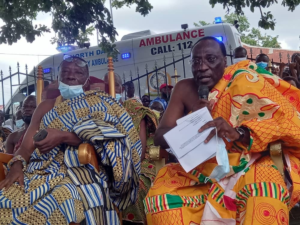 Togbe Tepre Hodo IV, Paramount Chief of Anfoega Traditional Area and President of the Volta Region House of Chiefs, has called on Chiefs to support the government in power to succeed.

He said “this we can do by offering for example constructive suggestions and criticisms, which will assist the government in power to propel the nation towards the achievements of its agenda for the benefit of the people.”

He said the surest way to the attainment of true peace, progress and prosperity of the nation was supporting government.

Togbe Hodo addressing a durbar of Chiefs and elders from the Paramountcy during a tour by President Akufo-Addo to the Volta and Oti Regions said as chiefs, they needed to continue to maintain their non-partisanship position in politics as dictated by the 1992 Constitution.

He called on citizens to exclude excessive partisanship, which had characteristised national discourse interactions adding that “we all have a nation to build.”

The Paramount Chief noted that establishment of District Assemblies and the Decentralisation concepts were designed and crafted to bring development to the doorsteps of the citizenry.

He noted that since the creation of the North Dayi District Assembly about nine years ago with Anfoega as District capital, the communities that made up the district were waiting with keen anticipation and expectation to receive and enjoy their fair share of developments.

“I must say however that things began to change gradually and for the better with the commencement and new execution of some projects within the past four years.”
He mentioned the construction of a District Police Headquarters at Anfoega, District Electoral Commission offices and National Health Insurance Authority, a six-Unit classroom block, execution of bungalows for Assembly staff and the gravelling of Anfoega Akukome to Anfoega Aveti road as some of the projects.

The Paramount Chief said the execution of the projects pointed to the fact that they could hope and expect steady progress in terms of fulfilling their needs in the community and they were thankful for the progress made so far.

Togbe Hodo also sought the President’s intervention in completing the dining hall block of the Anfoega SHS to assist enrolment, bitumen surfacing of the Anfoega Akukome to Aveti road, which was strategic since communities along it served as food baskets for Anfoega and its surroundings.

He also said some Anfoega communities were not covered by water projects from Kpando Torkor and called on the President to intervene by ensuring Ghana Water Company Limited extended water supply to the affected communities.

The Paramount Chief also appealed for an office structure for the Ghana Education Service in the District adding that the projects when completed would improve and accelerate development of the district and the region.

He appealed to President Akufo-Addo to intervene on the  Peki to Have stretch of the Eastern Corridor Road to bring relief to communities along that stretch .

President Nana Addo Dankwa Akufo-Addo in his response said the asphalting of the Anfoega Akukome to Aveti Road and water extension and expansion of educational facilities were matters he and his ministers could directly deal with and “will be on our table when I get back to Accra.”

He said the Local Government Minister revealed that there were some readily available funds that would enable him to address the question of premises of the Education Department of the Assembly.

The President said 10 concurrent contracts had been given for the Eastern Corridor Road and one of them is for the Peki-Have Road, which would soon be completed.

“Let me assure you, as much as possible I will always stay within the realm of unity and not partisanship. I believe Ghana is one, to continue as one and will live as one and will develop rapidly.”

President Akufo-Addo noted that his visit to the Volta Region was to continue with the custom he set for himself in his first term which was to visit each region in every year of his mandate at least once.

He said it was for him to see how government projects were playing out and also to hear the concerns of the people with the governance of the time “like some of the issues that you have put before me today. It enables us to re-engineer the governance system.”

President Akufo-Addo said he was in the region to thank the people for their vote for him and the NPP during the 2020 December Polls.