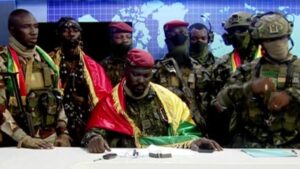 On Sunday September 5, 2021, news broke of a military coup in Guinea. The capital, Conakry erupted, not in resistance, but in jubilation. The country’s first democratically elected leader, Alpha Conde, has been deposed in what appears to be a bloodless coup. The putsch carried by his own Special Forces, has been widely said to have had no casualties, but some reports elsewhere say three soldiers died when the Special Forces stormed the presidential residence to arrest the President.

While the international community – the UN, US, Russia governments, the African Union, ECOWAS among others have condemned the coup and called for the release of Conde, it does appear that a wider section of the world community, especially, most in Africa have justified the coup. 83-year-old Alpha Conde who was elected in 2010, changed his country’s constitution in March 2020, and ran for a third term. That decision provoked a massive protest that was violently put down and dozens of protestors were killed. Opposition politicians were also arrested.

The coup seems to have been welcomed by most Ghanaians on social media – considering the fact that Ghanaians themselves are no strangers to coups. The country’s last military coup was in 1981. The military regime that emerged from that coup ran the country till 1992 when it ushered the country into multi-party democracy. But after nearly 30 years of the democratic process, quite a good number of Ghanaians, particularly the youth have grown restless and disillusioned as a result of unfettered corruption, nepotism, and mismanagement leading to high unemployment.

Some Ghanaians commenting on the Guinea coup on social media say the military intervention did not lead to any death, while the elections in Ghana on December 7, 2020 which retained President Nana Akufo-Addo for a second term in some cases resulted in the deaths of at least nine people. Curiously, no one is facing charges anywhere for any of the deaths, caused in large parts by gunshot wounds.

While Guinea is endowed with natural resources, harbouring some of the most resourced precious minerals in Africa, the country is considered one of the poorest on the continent.

It is yet to be seen how the leader of the coup, a Conde loyalist, a former French Foreign Legionnaire who was invited to Guinea by Conde, and promoted from a corporal within a short period to a Colonel, and put in charge of the Special Forces, who also protected Conde, Mamady Doumbouya would fare.

In speeches he has made so far, he has said they took power from the elite for the people.