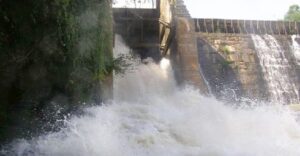 The Director General of the National Disaster Management Organization (NADMO), Mr Eric Nana Agyeman-Prempeh says government has mapped out a strategy to respond to any disaster that may occur as result of the spillage of the Bagre and Kompienga Dams from Burkina Faso.

The strategy, according to him brought all the relevant security agencies and NADMO officials together and stationed at vantage places to respond decisively and quickly to any fallout from the spillage of the two dams.

“As a nation, we are  much prepared, we have three camps, one at Bazua in the Upper East Region, one at Walewale in the North East Region and one at Tamale in the Northern Region, where the military, the police, the marine and NADMO officials are all stationed, in case there is any disaster we can move in to respond quickly.

“Unlike previously, when we will come and wait until it gets worse before we call in the police or the military, this time round government has decided that we all come together, so we are very much prepared so that in case it happens we will respond quickly,” he said.

The Director General who said this during a courtesy call on Mr Stephen Yakubu, the Upper East Regional Minister in Bolgatanga added that NADMO was also well resourced in terms of relief items to cater for people who may be affected by the spillage and other flooded related disasters.

Mr Agyeman-Prempeh noted that indiscipline and unwillingness to relocate to higher grounds was one of the major challenges in their sensitization drive to get residents out of the danger zones.

“The only problem we have now is some of the indiscipline attitude of some residents who are closer to the White Volta for instance, they live and farm there and trying to convince them to move to higher grounds to live with relatives and friends until the spillage passes becomes difficult and you cannot also force them,” he added

The Director General lauded the efforts of the traditional authorities in the five regions of the North for playing crucial roles over the years in educating their subjects especially those living in the flood prone areas whenever the dams were being spilled.

The Upper East Regional Minister lauded the efforts of NADMO for their sensitization efforts and urged farmers and residents along the White Volta to adhere to the directives to relocate to higher places to avoid destruction of lives and property.

According to SONABEL, the Agency managing the two dams, as at Wednesday September 1, 2021, the upstream level of the Kompienga dam was 174.95 metres with level rising while filling rate was 55.71 percent as against 47.86 percent on the same date in 2020.

SONABEL noted that the water level of the Bagre was stable and opening of the valves would be done when the height is 234.75 metres.