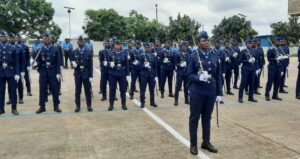 Some 49 new officers have been commissioned into the Customs Division of the Ghana Revenue Authority (GRA) as Assistant Revenue Officers.

This was after the senior cadets had completed their course in Basic Paramilitary and Customs training at the GRA Academy, Kpetoe in the Agotime-Ziope District.

The ceremony had four contingents including the graduating and the regimental band contingents treating the small crowd with band music and spectacular performances such as trooping of the band, drill display, and march past.

Colonel Kwadwo Damoah (Rtd), the Commissioner, Customs Division, who was the Reviewing Officer, congratulated the new officers telling them to be proud of being part of an Authority charged with an onerous responsibility to collect revenue for the state.

“As young ladies and gentlemen, you’re starting your careers in the Customs Division of the Ghana Revenue Authority. Among other national assignments that you might be undertaking from time to time, your principal responsibility will be to collect revenue for the state in the form of taxes and duties. You must be proud to be part of an Authority that is charged with this onerous responsibility.

Additionally, you must not lose sight of the fact that you’re also part of the National Security Architecture.”

He advised them to be guided by the principles of integrity, fairness, professionalism and service and always be desirous to learn and acquire knowledge on the job to help them throughout their career life in Customs.

Col. Damoah encouraged the new officers to willingly accept postings to any location within the country, adjust to to the culture of the people and be respectful to every stakeholder they would be dealing with from time to time

Out of the 49 graduands, five (three males and two females) were awarded for their outstanding performance during the course of the training.