Home / General News / Suspected member of kidnapping syndicate arrested, one on the run

Suspected member of kidnapping syndicate arrested, one on the run

August 27, 2021 General News Comments Off on Suspected member of kidnapping syndicate arrested, one on the run 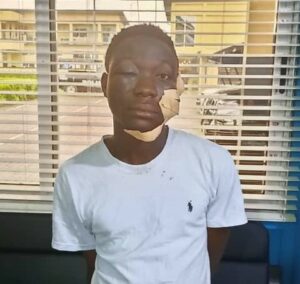 The Ashanti Regional Police Command is investigating a 24-year-old man who allegedly attempted to kidnap a five-year-old female child at Patasi, a suburb of Kumasi.

Michael Akwasi Agyemang, the suspect, currently in police custody, was reportedly arrested through the vigilance of some members of the community.

Assistant Superintendent of Police (ASP) Godwin Ahianyo, the Regional Police Public Relations Officer (PRO), told the Ghana News Agency (GNA), Kumasi, that the timely arrival of the police on Tuesday, August 24, saved the suspect from being lynched by an angry mob.

According to police preliminary investigations, the suspect was allegedly sent by one Eric, a purported member of a kidnapping syndicate.

ASP Ahianyo said the child was doing well and had since been reunited with her parents.