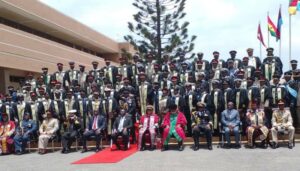 Vice-President Mahamudu Bawumia on Friday launched an academic journal for the Ghana Armed Forces Command and Staff College (GAFCSC) to be a channel for communicating academic knowledge locally and internationally.

The journal, known as “The African Journal of Defence, Security and Strategy” was compiled and edited by the College and is the first-ever academic journal developed by a military college in the West African sub-region.

It would help in broadening the scope of academic frontiers of the military to meet the dynamics in security and intelligence-related issues.

Vice President Bawumia, who was the Special Guest at the 2021 joint graduation of Senior Staff Course 42 and Master of Science Degree in Defence and International Politics of GAFCSC in Accra, officially launched the Journal to climax the ceremony.

The Vice President acknowledged the immeasurable contribution of the College to existing knowledge and scholarship since its inception in 1963, not just in the field of defence and security but to the general Public Service practices.

He believed the journal would contribute towards addressing evolving and contemporary African challenges.

He lauded the College’s plan to introduce Philosophy Programme in Defense and International Politics and a Masters’ Programme in Security Studies.

In all, 81 students graduated, comprising 59 military officers and 22 allied students from some sister countries including Nigeria, Tanzania, Togo, Benin and Sierra Leone.

Some of the graduates were civilians from the various public and private institutions including the Electoral Commission, Ministry of Information, Electricity Company of Ghana, the Chronicle News Paper, Asaase Radio and the Ghana Education Service.

Vice President Bawumia observed that terrorism and piracy was a major security threat in Africa and required collaboration among respective African countries to fight and eliminate it.

Dr Bawumia said the security and peace of the sub-region and Africa as a whole rested on their shoulders and urged them to work collaboratively to sustain the peace and stability of the continent.

Dr Bawumia urged the graduates to be good ambassadors of the College and exhibit the military traits of discipline and punctuality and remain focused and be agents of change in their respective institutions and society as a whole.

Rear Admiral Moses Kwadwo Beick-Baffour, the Commandant of the College, in his welcome remarks, said the military officers needed the capacity of modern security techniques to combat terrorism and piracy.

He entreated them to exhibit diligence, professionalism, and above all sound and analytical minds in all their endeavours.

“I equally encourage you to display your certificates with a sense of fulfilment having sacrificed time and resources at the expense of other competing needs to acquire knowledge in furtherance of your ambitions,” he advised them.

Students who performed exceptionally during the course were rewarded with books, certificates and plaques.

Major Peter Afreh of the Ghana Armed Forces emerged the Overall Best Graduate and received a book, plaque and a trophy.