Does Fix the Country have the potential to be a third force in Ghana politics? 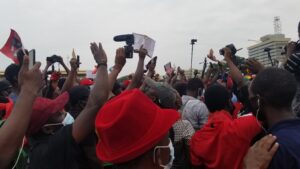 Last Wednesday August 4, 2021 a historic protest was held in Accra, the capital of Ghana. Thousands of citizens unhappy with the state of governance took to the streets to register their displeasure. There is unanimity about the group – that it is non-partisan and moved purely by patriotic sentiments. Using the hashtag #FixTheCountry, the group which started its campaign on social media and had planned street protests for months, were frustrated by the Ghana Police who went to court to stop the group. In the end the group went back to court to get the injunction lifted to pave way for the protest.

Among calls by the protestors include a demand for a review of the 1992 Constitution, fight against corruption and job creation for the country’s bulging youth who form the largest group in the population.

On hindsight, it appears Ghana’s 1992 Constitution was accepted as a compromise document to hurriedly push out, or as it were, to see the back of a military regime that had stamped itself into Ghana’s political system. The military regime of the Peoples National Defence Council (PNDC) had held onto power after the December 1981 coup d’etat, shoving traditional politicians into the background.

People you would call ‘career politicians’ were itching to come back into business, and the military administration, having come under too much pressure to give way to multi-party democracy following years of economic missteps and an almost collapsed socio-economic system was looking for a way out of the doldrums and a new constitution looked like a legitimate way to ease out of the mess. 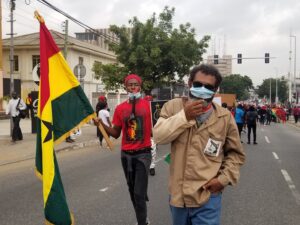 Therefore, the 1992 Constitution was ushered into being to guide the country into multipartyism. But it didn’t take long for the cracks in the Constitution to show. While some accepted it as a convenient document to manage the governance system adopted by the country following those turbulent years of military adventurism, some were hopeful that the flaws in the document would be amended and the weaknesses strengthened.

While, it is not easy to tell why, it does look like only two political parties seem to have benefitted from the weaknesses in the Constitution, often to the detriment of a firm system of governance that would have profitted the larger population.

The National Democratic Congress (NDC) and the New Patriotic Party (NPP) have both taken turns to run the country with the 1992 Constitution in the country’s 29 years of democratic governance. The NDC metamorphosed from the PNDC, and the NPP is a residue of one of the oldest political parties supposedly birthed from the ideologies of Busia, Danquah, and Dombo.

However, each time they are in opposition, each of the parties point out the flaws in the constitution, but do nothing about it when they take over government. Their positions while in opposition and the views of other constitutional lawyers are all indicators that the 1992 Constitution has too many flaws to allow a strengthening of democratic governance in Ghana.

Even though the Constitution states clearly what the limits of the Executive branch of government are, it also seems to have given the president an almost monarchical power, often compelling the other branches of government such as Parliament and the Judiciary to act as accessories instead of checks on the Executive. 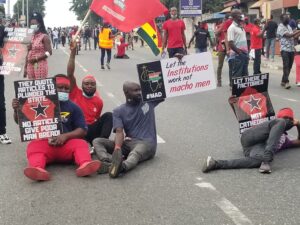 The two political parties quite largely have exploited the weaknesses in the Constitution to their advantage, sometimes even flouting it with impunity. By their actions collectively, they have weakened state institutions that normally should work to keep political actors in check.

It is for instance open secret that the NPP government removed the Electoral Commissioner, Charlotte Osei who supervised the 2016 elections and replaced her with a favourite with sympathies for the party, Jean Mensa. The government also hounded and forced the Auditor-General, Daniel Domelevo into early retirement because of his anti-corruption stance.

The government which condemned what it called excessive taxation by the NDC government, has introduced new taxes, after abolishing some taxes in the early days when it took power.

The pendulum-like conduct of the government and the blatant abuse of power, financial mismanagement as in the case of how funds for the COVID-19 pandemic have been managed without transparency has caused disaffection among most of the citizens. There is rising cost of living, growing joblessness and despondence among citizens. The deepening social malaise has led to a loss of trust of the political leadership and citizens are looking for respite.

As a result of the bad governance, lack of accountability and fairness, what many citizens including some members of the two political parties see as looting and misuse of public resources and express exhibition of impunity among the ruling class, most citizens now think the NPP is not any different from the NDC that it replaced after the 2016 elections. Disappointed and disillusioned, some citizens are turning the heat on both the government and opposition. There is loss of faith and confidence in the two parties and there have been calls for a third force. A third force that would break away from the rotten and corrupt partisanship of the two largest political parties. A third force that puts Ghana ahead of all partisan and parochial considerations, and that spirit was manifested in the Fix the Country protest, where only the Ghana flag was in display.

Ghana’s future is at the crossroads. Multipartyism seems to have not fully fulfilled the expectations of the citizens, indeed, multipartyism which has been hijacked and turned into ‘duopartyism’, has become a monumental failure and a bedrock for corruption.

It is time for change – not change into a disguised new, but a true new system of political leadership that would pay attention to the objectives and aspirations of the teeming youth of Ghana, a system of governance that respects the rule of law and pursues a fair and just society.

But does the Fix the country group have what it takes to dislodge the two parties and become a third force? Time will tell.