Food vendor fined for selling without certificate and accumulating rubbish

August 6, 2021 General News Comments Off on Food vendor fined for selling without certificate and accumulating rubbish 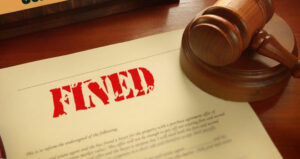 Janet Todoko, a food Vendor in Hohoe, has been fined by the Hohoe Magistrate Court on two counts of selling food without medical certificate of fitness and accumulating refuse on her premises.

Todoko is to pay 25 penalty units (GH¢300.00) on both counts or serve three months in prison if she defaults in paying the fine.

The convict pleaded guilty when she appeared in the court presided over by Madam Edith Lucy Dzormeku and was convicted on her own plea.

Todoko explained to the court that although her medical certificate expired in March 2020, she was unwell during a mass registration exercise for food vendors adding that the accumulated refuse was meant to be burnt since she had dug a pit, where she dumped her refuse.

Prosecuting, Mr Frank Azila-Gbettor, presenting facts of the case said the convict living along the Hohoe Bungalow to Likpe road sold banku and drinks to the public.

He said on June 14 this year, at about 1015 hours, a team of Environmental Health and Sanitation officers in Hohoe entered the convict’s premises which was the chop bar, while on a premises inspection rounds.

The Prosecutor revealed that during the inspection, the team realised that the convict had refused to undergo medical screening exercise organised for food vendors, while there was also accumulated household refuse on the ground at her selling premises.

He said the convict was educated and advised to collect the refuse and stop the practice of heaping refuse at the place and further advised to go to the Unit for a medical form for her examination and submit the report for inspection within three days.

Mr Azila-Gbettor said on June 25, the officers made a follow-up to the premises and found that the convict had not heeded to all the advice and education given her and continued her business.

He said the health implications of Todoko’s actions was that since she sold food and drinks to the public and refused to undergo medical screening, her health status could not be guaranteed and may end up transmitting typhoid and other intestinal diseases.

The Prosecutor added that the heaping and accumulation of household refuse on the bare ground in food premises became a good breeding ground for flies and vermin that picked and transmitted germs to humans.

He said the convict was brought before the court to serve as a deterrent to other food vendors.