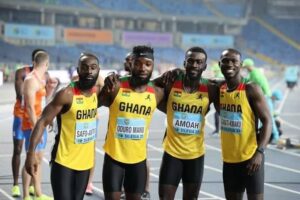 Ghana’s 4×100 relay team have reached the finals of this year’s Olympics after clocking an impressive 38.08 in men’s 4×100 round two heat.

Ghana’s quartet with this time have set a new national record and will compete in the 4x100m final for the first time since Atlanta 1994.

Ghana’s team which includes Joseph Paul Amoah, Sean Sarfo Antwi, Benjamin Azamati and Emmanuel Yeboah finished in 5th position as they grabbed a spot in the finals as one of the fastest non-qualifying times.

Ghana would be the only African team in the finals after South Africa failed to qualify having been disqualified in their heat.

Ghana would be in lane 9 of the men’s 4×100 finals on Friday (13:50 GMT) as they battle the likes of China, Canada, Jamaica, Great Britain, Italy, Japan, Jamaica and Germany.