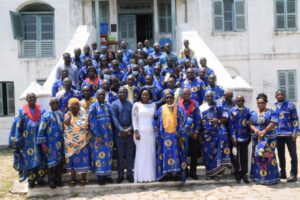 The Methodist Church, Ghana, has celebrated 60 years of God’s greatness with a call on Christians to instill in the youth the Biblical moral values to enable them to become responsible adults.

It said the church, over the years, had given hope to many depressed and weary individuals, and such hope, aspiration, and godly living were more critical in the current dispensation.

Most Reverend Dr Paul Kwabena Boafo, the Presiding Bishop of the Methodist Church was speaking in an interview with the Ghana News Agency (GNA) on the sidelines of the Church’s 60 Autonomy Anniversary on the theme: “Teaching Everyone To Live Like Jesus Christ” St the Wesley Methodist Cathedral in Cape Coast on Sunday.

The Biblical Pattern of Episcopacy enabled the Church to do away with some nomenclature such as ‘president’ and “chairman’ to adopt titles such as “Bishop,” which is more biblical.

He said the command of discipleship was not an option but a must to every Christian, both in word and indeed, as a stop-gap to the many ill-behaviours in society.

The Most Rev., said the Methodist Church, with its population and as one of the oldest churches in Ghana, must not renege on its efforts at training and producing good Christians who would influence the
World positively.

He, therefore, urged the members to be law abiding, work hard and create jobs among themselves to be able to support the growth and development of the Church and Country at large.

Touching on the Church’s contribution towards the socio-economic growth of the country, the Presiding Bishop, said the Methodist Church had been a major and phenomenal contributor to Ghana’s growth in terms of education, health, human resource, and provision of social amenities.

Thus, their efforts towards the status quo cannot be overemphasized, and that the church would continually push the Government and Country as a whole in achieving the Sustainable Development Goals.

He admonished the Church to go all out to preach and spread the gospel to fulfill the responsibilities assigned to them by God.

On the Lesbianism, Gay, Trans-Gender, Bi sexual (LGBT) bill, he said the Methodist Church was supporting the government spiritually and physically as the sovereignty and dignity of the Country was at stake without the bill.

He, therefore, called on organizations in support of immoral practices to respect the Country’s rules and laws as well as positive cultural practices.

Mrs Justina Marigold Assan, the Central Regional Minister and the guest speaker of the Anniversary applauded the Methodist Church for its immense contribution towards the growth of the Country.

She charged the members to live exemplary lives that would rekindle the desire of the youth to live for Christ.

Oppong-Boanuh charges new IGP, leadership to be united as he retires