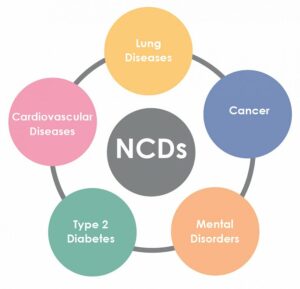 Ghana Non-Communicable Disease Alliance (GhNCDA), a non-governmental organisation (NGO) ) has called on the Ministry of Health to prioritize the treatment of non-communicable disease, considering the number of persons who lose their lives to it annually.

Addressing a two-day training workshop,  dubbed “Our views our voices”, an initiative of the Global Non-Communicable Diseases (NCD) Alliance at Sefwi-Wiawso, Mr Labram Musah, National Co-ordinator of the Alliance said prioritising non-communicable diseases such as stroke, cancer, asthma, and diabetes was a must because they have emerged as a significant public health threat.

According to him, such diseases accounted for over 41 million deaths annually representing over 70 percent of all deaths and a leading cause of death in the world today.

Mr Musah pointed out that non-communicable diseases kill about 94,400 persons in Ghana annually, adding that it was no longer a “disease of the rich” because everyone was at risk due to change in lifestyle and low level of commitment, investment, and awareness creation by the government and industry players.

He explained that these diseases could be effectively prevented or controlled when proper measures are put in place to regulate the consumption of alcohol, tobacco, unhealthy foods, air pollution and encourage physical activities of all forms.

The coordinator in this regard called on Ghanaians to eat local foods especially fruits and vegetables and do a lot of exercises to keep their bodies active.

He however commended the government for including some non-communicable disease treatment in the National Health Insurance Scheme and asked the government to extend it to cover many more of such diseases.

Mr Musah urged  the government to put heavy taxes on alcoholic beverages, tobacco and other unhealthy foods to deter citizens from patronising such products.

He further used the opportunity to call on the President and Cabinet as a matter of urgency to approve the long-awaited National non-communicable Disease(NCDs) policy.

Some of the participants who were mostly persons living with non-communicable diseases thanked the organizers for the training and promised to educate their community members on what they had learnt.

The Non-communicable Disease{NCA} Alliance founded in 2009 is a civil society network uniting 2,000 organisations, scientific and professional associations, academic and research institutions in 170 countries to improve NCD prevention and control worldwide.