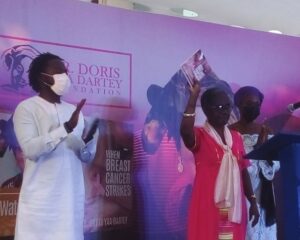 Two books, authored by the late Dr Doris Yaa Korantemaa Dartey, a renowned journalist, have been launched to commemorate the one-year anniversary of her passing.

The first book, “The Watch Woman: A compilation of columns”, a 599 paged book, which would give those who loved to read her stories a befitting memoir, was launched by Mr Yaw Boadu-Ayeboafo, Chairman of the National Media Commission.

He said sustaining a column was extremely difficult; however, Dr Dartey managed it simply and sustained it for 12 years because she offered simplicity and clarity in her writing, and it had been a humbling experience for him to be able to launch one of her books.

The NMC Chairman said Dr Dartey had exhibited humanity in everything she did and made people feel their opinions mattered and were important.

Madam Ajoa Yeboah-Afari, former President of the Ghana Journalists Association (GJA), who launched the second book, ”When Breast Cancer Strikes,” which talked about Dr Dartey’s experiences with breast cancer and the need for its early detection, recommended it to all and sundry, saying, there were countless reasons for it to be purchased.

“I salute, as always, YaaD’s audacious spirit, especially in having the pluckiness to write her story, to inform us, to give us this gift, despite all she was going through, We need to become campaigners in the breast cancer fight, as she urges us to be,” she said.

Madam Yeboah-Afari also commended the devotion and diligence of the children of Dr Dartey, Dr Bonnah Koomson, and all the other members of the team who had made the event possible.

Mr Affail Monney, President, GJA, said Dr Dartey had been a professional, had intellectual power, an incredible zest, unmatchable gusto, and had been relatively one of the few journalists with an independent streak and an objective bent.

He called on journalists to adopt those qualities and nourish their stupendous commitment and journalistic output at all times to serve as a tribute to her.

Mr Monney added that the GJA would do whatever it could, to immortalise her name.

”Dr Dartey was a Jacklyn of all trades, which included being GJA Chairperson of the Awards Committee, GJA Housing Project, and our representative at the National Media Commission, as Chairperson of the Graphic Communications Group and a columnist of Weekly Spectator,” he noted.

The late Dr Dartey had a Graduate Diploma in Women’s Studies and a PhD in Organisational Communication, from the Ohio University in the United States of America (USA).

She was a passionate environmentalist and committed to social inclusion, serving on several boards in the USA and Ghana, including the National Media Commission (NMC).

The Doris Yaa Dartey Foundation, a charitable Organisation has been established to work against societal norms and prejudices to provide a life worth living for vulnerable children in the areas of healthcare and education.

Proceeds accrued from the auction and sale of the books would be used to support the Foundation.

The books could be purchased at the Press Center and online at Dorismemorial.org or call 0232208724 for copies.