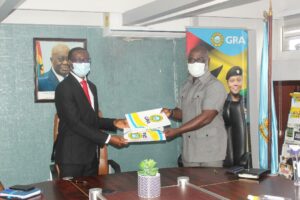 The Ghana Revenue Authority (GRA) has signed a Memorandum of Understanding (MoU) with the Gaming Commission to improve revenue collection.

Rev Owusu-Amoah, speaking at the ceremony, said the collaboration was a giant step towards harnessing revenue from all taxable sources.

“It is critical to have this agreement because it is one of the means of expanding the tax net necessary to make the country sustainable in the financing of its developmental agenda”, he said.

GRA was tasked by government in the 2021 National Budget Statement to mobilize some GH¢400 million from the gaming industry, but not an introduction of new tax.

He said the Authority had developed an effective software system to collect taxes electronically since most games of chance had moved from the manual to digital platforms.

The Commissioner General said both agencies would sensitize operators of the games of chance on regular basis on the need to pay their taxes.

The move, he said, was  aimed at making tax compliance friendlier and ensure fairness, transparency, efficiency and convenience in the system.

He urged operators to support government by paying their taxes and commended the Commission for its commitment and expressed the hope the collaboration would make a significant impact in the revenue mobilization drive of the state.

On his part, Mr Mireku assured the Authority of the Commission’s support of providing reliable data on operators to raise the needed revenue.

He was optimistic that the partnership would increase revenue mobilization and meet the target set by government.