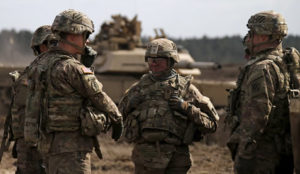 The United States plans to officially end its combat mission in Iraq and focus solely on training and advising security forces in the country in the future.

The combat troops still in Iraq will leave by the end of the year, according to a joint statement from both governments circulated by the US State Department.

The role of international soldiers in Iraq is to support the government in its fight against Islamic State militants, the statement said.

US President Joe Biden said ahead of a meeting with Iraqi Prime Minister Mustafa al-Kadhimi at the White House that the role of US troops will be “just to be available, to continue to train, to assist, to help, and to deal with ISIS as it – as it arrives.”

According to the White House there are currently some 2,500 US soldiers deployed in Iraq. The future figure will depend on the demands of the changed mission, it said.

Experts do not anticipate a major troop withdrawal.

The US is leading an international coalition fighting the Islamic State group in the region. The US deployment is controversial in the country.

Iraqi parties and militias closely linked to Iran are among those calling for a withdrawal, while other forces such as Sunni parties and Kurds want US troops to stay.

Under Biden’s predecessor Donald Trump, the US reduced the number of troops in Iraq.

Iraq is unstable, with mass protests against the country’s leadership happening regularly since late 2019. Protesters accuse the government of mismanagement and corruption.

BOST to pay GH¢9.9m to Hask Oil as judgment debt