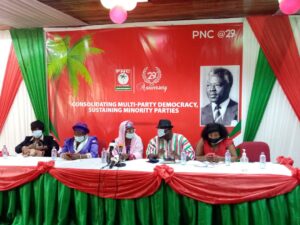 The People’s National Convention (PNC) has held its 29th anniversary symposium to deliberate on ways to ensure the success of the Party in future political events.

Present at the symposium was the Party’s twin which is the Convention people’s Party (CPP), as well as representatives from the NDC, NPP, PPP, and GCPP.

Madam Janet Asana Nabila, General Secretary, PNC, speaking at the event, said the Party had congregated in diverse ways in shaping and consolidating Ghana’s democracy, socioeconomic development, health and education among others.

She said the forebears of PNC had been able to come up with policies such as the GetFund, National Insurance Scheme, School Feeding Programme among others which had been adopted by various governments in the country.

Madam Nabila said the implementation of those policies had not being the best under the NPP and the NDC government over the years.

The position of the Party could not be underestimated despite the many challenges it faces like most minority parties.

The country’s political space was gradually becoming polarised and that it seemed to be coming a two party state which is detrimental to the country’s multi-party Democracy.

She said PNC from the onset of the 4th Republic had produced several members of Parliament some of whom even served as Ministers of State to successive governments.

Madam Nabila added that the Party had failed to produce Members of Parliament in recent times due to lack of funding and logistical support for programmes and activities for activism, and participation in the political discourse.

“We are having dwindling political fortunes largely because even the media and most civil society organizations are not giving us enough support,” she said.

Madam Nabila said the Party planned to rejuvenate not only to win political power, but also as a major stakeholder in Ghana’s democratisation process as a nation in the next decade of the fourth republic.

She said as part of the Party’s first anniversary celebration, they intended to undertake two major activities hoping to add more in the near future.

Madam Nabila said the first was the anniversary Symposium to expatiate on the theme of the celebration: “Consolidating Multi-Party Democracy, Sustaining Minority Parties”.

She said the second activity was a Fundraising Dinner to share with its stakeholders on its new political pursuit and climax of the anniversary commemoration.

She said the legacies of the CPP and the PNC forebears were a testament of the party’s ability to govern Ghana better than the two major political parties.

She called for consensus and deliberations among the smaller political parties to come out with a united front to oust the two big parties in the country.

Presidency responds to ASEPA’s petition for removal of CJ