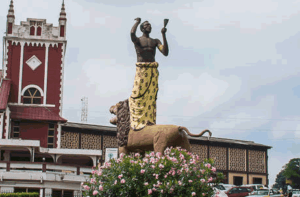 The Ashanti Region has recorded 783 new cases of COVID-19 within one week as the country grapples with the third wave of the global pandemic.

The cases which were recorded between 19th and 25th July brings the cumulative number of cases in the Region to 17,898 with 297 mortalities, leaving 1,135 active cases.

Dr Emmanuel Tinkorang, the Regional Director of Health Services who announced this at a media briefing on Monday, said 16,466 had recovered with 26 patients currently on admission at treatment centres.

He said a total of 1,595 health workers had been infected since the first case was recorded in the country in March last, with two of them unfortunately losing their lives.

The Regional Director disclosed that 365 students in basic, secondary and tertiary institutions in the Region had been infected in 85 schools but 254 of them had recovered with 111 active cases being managed.

He said 25 schools currently had active cases and urged management of schools to step up efforts to ensure compliance to the safety protocols to prevent further spread of the disease in schools.

He noted that cases of COVID-19 in schools was a source of worry for the Health Directorate, considering the huge numbers confined in the schools.

The presence of the Delta variant in the Region and low coverage of vaccination, according to Dr Tinkorang were the main challenges facing health authorities in the Region.

He said majority of the new cases were recorded in the Greater Kumasi Metropolis with areas such as Adum, Abrepo, Oforikrom and Kwadaso being the hotspot.

The Directorate, he said, would continue to engage the media and also mobilize opinion leaders as well as stakeholders to intensify public education on the need to observe the COVID-19 protocols to stop the spread.

Dr. Tinkorang cautioned health facilities charging for COVID-19 tests to desist from the illegal practice, saying that they could only charge persons who take the test for travelling purposes.