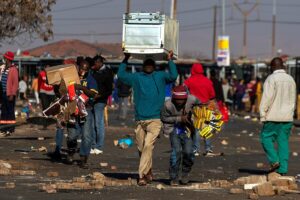 An environmental disaster is taking shape in the South African port city of Durban, activists are warning, following days of violence in parts of the country.

During the large-scale mayhem and mob violence, numerous chemicals were spilled into nearby waters from a warehouse set on fire, killing fish and other aquatic animals on a large scale.

Thandile Chinyavanhu of Greenpeace Africa called for an immediate investigation and clarification on the nature of the pesticides and other chemicals.

“We don’t have clarity at this point. We definitely need to know the extensive list of chemicals and the potential impact they could have when they interact together in the environment,” Chinyavanhu told broadcasters eNCA on Friday.

Pesticides and other chemicals blending together in the water could form a dangerous mix, Chinyavanhu added. The water has a strong turquoise colour and smells extremely like sulphur. Poor air quality is also a concern for residents amid the coronavirus pandemic.

The coastal province of KwaZulu-Natal and Gauteng province were rocked by riots, looting and vandalism for about a week starting on July 9. Some 337 people were killed.

Major highways and rail routes were shut down, leading to shortages of food and fuel, while businesses were plundered and burned.

Protests initially broke out over the imprisonment of ex-president Jacob Zuma, who hails from KwaZulu-Natal. He was given 15 months in prison for contempt of court in relation to a corruption inquiry.

But the demonstrations soon descended into arson and gunfire, with vigilante groups forming to protect property.

Helping to fuel the violence was frustration over the swelling unemployment rate and economic inequality, long-running problems exacerbated by the coronavirus pandemic.