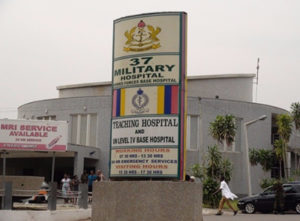 An Accra High Court has awarded damages in the sum of over GH¢1million against the 37 Military Hospital for maternal negligence.

Mrs Helena Brema Nyamekye, a 27-year-old PhD Student is said to have bled profusely to death shortly after labour in 2015, when doctors rejected a request from the husband for her to deliver through Caesarean Section.

Thus after her death, the deceased’s father and her husband dragged the Hospital to court for damages for loss of life, trauma and negligence of duty.

The baby, who was the subject matter of the labour also suffered a deformity in the right arm.

Justice Kweku Tawiah Ackaah-Boafo, after examining the merit of the case and the evidence held that, the death of the deceased was preventable.

The court, therefore, awarded damages of GH¢400, 000 each to the father and husband (Captain Nyamekye) of the deceased for loss of expectations of life.

The total cost of damages awarded against the Hospital for negligence is GH¢1, 075, 000.

The court held that looking at the age of the deceased, 27 years and her knowledge and expertise, she would have been beneficial to the country and the family.

According to the court, the event leading to the death was unacceptable and if care was not taken there would be more of such deaths.

It was the opinion of the court that there was “no air of reality” from the evidence adduced by the defendant.

It also indicated that, there was no doctor or house officer to review the process and so no proper monitoring was done on the deceased when the deceased was in the Hospital.

“Per the testimonies of one COP Naa Shioa Odoi, a staff of the Hospital, it became very clear that the deceased was not properly monitored until she gave birth and later bled to death,” the court added.

The deceased, the court said, lost over 1.5 litre of blood since “no proper plan was put in place to monitor her even though they knew her situation.”

Justice Ackaah-Boafo in his judgment said, the medical team did not give proper care to the deceased and that the pathologist who examined the body indicated that the direct cause of death was due to the Hospital’s negligence.

The first plaintiff is the father of the deceased and the second plaintiff, the husband (Captain Nyamekye), a military officer.

The deceased, before the incident, was a PhD Student at University of Ghana, Legon.

The court held that the two doctors who handled the victim gave contradictory accounts and gave no reason why the request for the caesarean section was not heeded.