July 13, 2021 General News Comments Off on My husband was threatened several times before his death – Kaaka’s wife 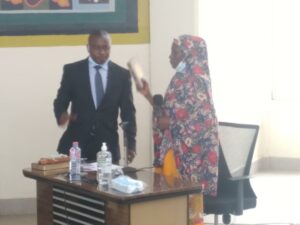 The wife of Ibrahim Mohammed whose death sparked violent protest at Ejura leading to the death of two civilians, has told the Ministerial Committee investigating the issue that her husband was threatened several times before his demise.

Sahada Huudu said the activities of her husband, also known as Kaaka, on social media incurred the displeasure of some members of the New Patriotic Party (NPP) who claimed it was making the party unpopular.

She said Kaaka told her how some people threatened him anytime he visited places where NPP youth converged to discuss party issues.

She made the revelation when she appeared before the Committee as the 13th witness to give evidence on Monday.

The mother of five told the Committee that despite the threats, her husband remained resolute in exposing the ills in the community with the conviction that it was for the good of the public.

“He has been telling me about those who have been threatening him to stop posting on social media,” she told the Committee.

“About one month before the death of my husband, he went to a particular NPP base where one of the youth warned him to stop posting on Facebook or face the consequences,” she added.

She said she advised her husband who was a phone repairer and fashion designer to stop going to that particular NPP base since there were other locations in the town but it did not take long for his life to be terminated.

According to her, Kaaka who was also a staunch member of the NPP maintained that his posts on social media were for the good of the public and therefore saw nothing wrong with his actions.

Ejura has been in the news for the past few weeks after the death of Kaaka, a social media activist as angry youth of the town hit the streets to demand justice.

Mutala Mohammed and Abdul-Nasir Yussif died from gunshots in the ensuing clash between the youth and security forces deployed to maintain peace and order.

Meanwhile, three persons have been remanded by the Asokwa District Court following their arrest over Kaaka’s death.