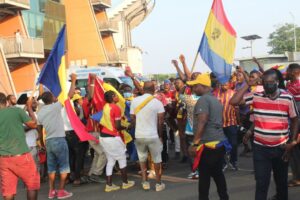 Accra Hearts of Oak have won the 2020/21 Ghana Premier League (GPL) title despite sharing the spoils with Liberty Professionals in their penultimate match of the season.

Liberty Professionals defender Kwame Paul scored in the late stages of the second half to cancel out Daniel Afriyie Barnieh’s first-half strike for the Phobians.

Despite the draw Hearts still emerged champions with a game to spare after arch-rivals Kotoko failed to beat Bechem United at the Nana Fosu Gyeabour Park.

Liberty Professionals surprisingly started the game on the front foot with some good chances but Hearts survived the early scare with goalkeeper Richard Attah producing some good saves.

Kwadwo Obeng Junior should have put the Phobians ahead on the 20th-minute mark but unfortunately skied his effort.

Liberty Professionals goalkeeper Kofi Baah delivered a superb save to deny Daniel Afriyie Barnieh from close range despite suffering a head injury which saw a long stoppage of the game but he continued regardless.

The home fans were certainly getting impatient with Kwadwo Obeng Junior missing some glorious opportunities.

Liberty Professionals came close in breaking the deadlock in the 38th minute but Amadu Adamu’s effort just around the edge of the penalty box was calmly collected by goalkeeper Richard Attah.

Afriyie Barnieh deservedly scored the opener for the home side in the first half stoppage time as he headed in from close range after a superb corner-kick from Salifu Ibrahim.

Liberty Professionals despite being a goal down started the second half with the same tenacity as they did in the first half as they pressed for the equalizer.

Frederick Ansah Botchway came close in doubling the lead for the home side but his well-struck free-kick from 25-yards was easily dealt with by goalkeeper Kofi Baah.

The ‘Scientific Soccer’ lads were the much better side in the second half but lack the needed cutting edge to threaten the Hearts defence.

The tempo of the game was very slow with a quarter of the game as Hearts seemed content with their solitary lead.

Kwame Paul pulled parity for Liberty Professionals in the late stages of the second half to secure a vital point for the away side as they look to avoid the drop.