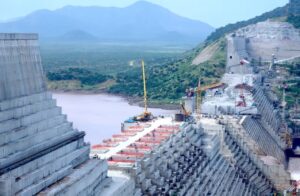 Ethiopia has officially informed Egypt it began the second phase of filling its hydroelectric dam on the Blue Nile, a move that Egypt said is a threat to regional security.

Egyptian Minister of Water Resources and Irrigation Mohamed Abdel Aty said late on Monday that he received an official letter from his Ethiopian counterpart about the resumption of the filling process.

Egypt and Sudan are seeking a legally binding deal that would guarantee appropriate flows of water and a legal mechanism for resolving disputes before the dam starts operating.

Abdel Aty also sent a letter with the latest updates to the United Nations Security Council, which is expected to discuss the issue on Thursday.

Last year, Ethiopia celebrated the first filling of the dam thanks to seasonal rainfall.

Egypt, the most populous Arab country, relies almost exclusively on the Nile for farming, industry and domestic water use.

Ethiopia says Egypt’s worries about the dam are baseless.