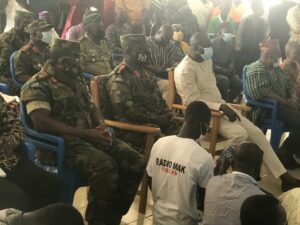 Assures of maximum punishment for perpetrators

Major General Thomas Oppong-Peprah, the Chief of Army Staff, (COAS) has apologised to Wa Naa Fuseini Seidu Pelpuo IV, the overlord of the Waala Traditional Area and the people of Wa over the military brutalities in the Upper West capital of Wa, on Thursday, July 1.

Major – Gen Oppong-Peprah condemned the actions of the rampaging military men saying, “We will not allow a few of the men to destroy the golden relationship that exists between the good people of this area and the military.”

The COAS rendered the apology in Wa, on Friday, when he led a delegation from the Military High Command to pay a courtesy call on Wa Naa Pelpuo, as part of a one-day working visit to Wa in relation to the incident.

“I want to assure you that we are going to fish out, today, all those who were involved in this and exert the maximum punishment according to our code of service discipline,” he said.

He said they deemed it imperative to apologise to the chiefs and people of the Region, as the cooperation of the people was necessary for them to achieve their mandate of securing the country, particularly at a time the country was facing “a new form of threat” from terrorists in neighbouring Burkina Faso.

Major-Gen Oppong-Peprah said the Government invested a lot of resources to establish a regiment in the Region to help consolidate the peace the area was enjoying and gave the assurance that those military men would not go unpunished.

Some military personnel allegedly attacked and molested civilians in Wa on Thursday, July 1, 2021, over the alleged stealing of their colleague’s mobile phone.

Naa Pelpuo said the atrocities meted out to the people ought to be a concern to well-meaning citizens and called for an immediate and severe punishment for the perpetrators of the atrocities.

He described the act as “dastardly” and “unacceptable” since Wa wass a charitable beacon of peace in the country”.

However, it was thrown into a state of panic as the rampaging men in uniform pounced on unarmed and unsuspecting civilians.

Naa Pelpuo appealed to the government to provide a compensation package to the victims of the military brutalities to alleviate their plight and to take care of their hospital bills.

“Anyone within the operational zone of the men we pay to protect us could have fallen victim to their senseless and bestial brutalities… A group of men in uniform chased some people into the house of one of my revered Chiefs, the Guli-Naa, who is also a former Member of the Council of State,” Naa Pelpuo said.

Meanwhile, Chief Inspector Gideon Ohene Boateng, the Upper West Regional Public Relations Officer of the Ghana Police Service, said the police also spotted the viral video on social media and the Regional Commander, Deputy Commissioner of Police (DCOP) Mr Francis Aboagye Nyarko, together with his team decided to find out whether the video was indeed credible.

He said after ascertaining the credibility of the video, the Regional Commander instructed the Crime Officer to immediately commence investigation into the issue so that perpetrators could be brought to book.

Mr Cletus Awuni, the Public Relations Officer of the Upper West Regional Coordinating Council, who was also a victim, said he received calls from media practitioners about the issue and wanted to follow up to validate the information.

“Upon getting to the main traffic, I saw the military men beating people any how and ordered some to roll on the ground,” he said.

He said when he questioned one of them over their action but he did not mind him.

Consequently, he proceeded to take a video of the action, which resulted in the brutality meted out to him.

He has since been treated at the Regional Hospital and discharged.

Meanwhile, authorities of the Wa Municipal Hospital reported that three casualties of the military brutalities were admitted to the hospital out of which two were treated and discharged.

The remaining one who had a fracture on his leg was referred to the Regional Hospital for specialist attention.