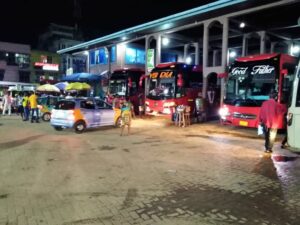 The 2021 Population and Housing Census is progressing smoothly in the Ashanti Region on Census Night (Sunday June 27) with the counting of selected populations.

Field Officers of the Ghana Statistical Service are capturing the data of travellers, outdoor sleepers (the homeless) and visitors lodging in hotels and guest houses.

Certificates are issued to those counted to avoid double counting.

Dr. Kobina Abaka Ansah, the Regional Statistician, in an interview with the Ghana News Agency (GNA) at the Asafo Lorry Terminal in Kumasi, the biggest transport hub in the Region, said more than six million people had been targeted for enumeration.

The ‘Census Night’, he noted, had been designed to herald the official commencement of counting of the citizenry in Ghana’s most populated Region.

“It is meant to capture every Ghanaian to ensure a successful exercise. Nobody will be left out,” the Regional Statistician told the GNA, and advised the people to strive to give accurate information to the Field Officers.

In the last Census, more than four million people in the Region were counted, according to the GSS.

The ‘Census Night’ comes in the wake of the recent listing of structures, which has seen about 98 per cent of houses and other places of abode being counted to facilitate the counting of the citizenry.

As part of the exercise, the GSS had stationed its Field Officers at all the lorry terminals in the Region, while the personnel also visit the various hospitality facilities, slums and make-shift structures to capture data of the citizenry.

On security, the Regional Security Council (REGSEC) has constituted mobile security taskforce to enhance the work of the Field Officers.

In a related development, Mr. Simon Osei-Mensah, the Regional Minister and Chairman of the REGSEC, has advised the people to cooperate with the GSS for a smooth and incident-free Census.

“Those who intend to create any problem will be dealt with in accordance with the law,” he told the GNA.

He said the Census was a vital national exercise since it provided the needed information to the government for effective socio-economic planning.

Mr. Osei Assibey-Antwi, the Mayor of Kumasi, also in an interview, rallied the people to give serious attention to the exercise.